In recent years, video game publishers have been putting more and more emphasis on options that enable as many players as possible to play their games. This is no different for Sony, which has unveiled accessibility features in God of War Ragnarok. These - as promised - are expected to be the most extensive in the history of the series.

The options and the philosophy of the developers in this regard are discussed in a special material.

"Nothing about us without us"

Both in the video and in an interview with BBC Sony Santa Monica made it clear that from the beginning it placed great importance on the issue of accessibility. Although God of War from 2018 won the applause of gamers and reviewers, according to the developers, the game could not be enjoyed by many potential buyers - from people with limited mobility to players with vision or hearing problems.

Therefore developers placed an emphasis on accessibility features from the earliest stages of work on Ragnarok. Not only consultants were involved in the development of the game, but also people with a direct interest in such features.

These people tested the game and shared feedback with the developers. All in accordance with the motto of accessibility-related organizations: "Nothing about us without us." Apparently, this approach proved to be a hit, gaining Ragnarok plenty of praise.

One of Sony Santa Monica's inspirations was The Last of Us: Part II and remake of the first installment, which were widely praised for their numerous options, enabling the player to customize the game to one's own preferences. Also God of War Ragnarok gives players a fair amount of freedom here.

There are dozens of options in the game. Not only do we have the ability to change the controls layout and a wealth of difficulty levels (with separate settings for combat, puzzles, camera, etc.), but also various aids, making it easier to navigate and move through the game world, pick up objects, etc. 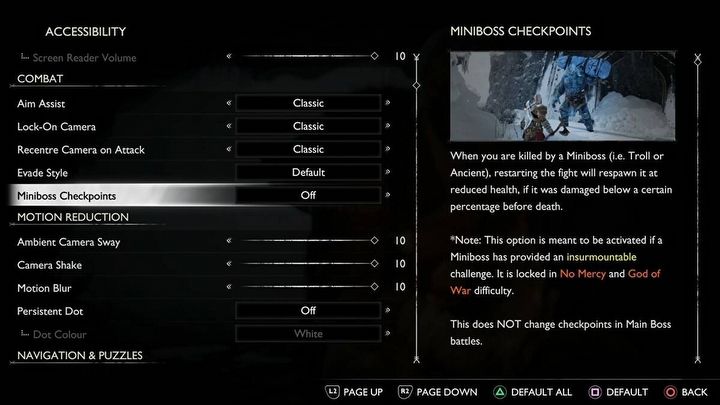 GoW Ragnarok is not going away The Last of Us :Part I in the number of accessibility settings.Sony Santa Monica

Visuals can also be personalized, such as color filters, strong contrast mode (again: available in several variants, for example, for fans of collectibles) or visualization of the controller on the screen.

There are also quite a few options related to sound. Among other things, we can set the color of the subtitles and their background, and even turn on an arrow that will direct us in the direction of the sound source. There are also visual cues.

God of War Ragnarok enables us to customize each element individually, but the developers have also included a huge number of presets. You can learn more from our previous post.

Satisfaction instead of "easy mode"

The video also addresses the issue of the perception of these features concerning a small number of players as making the game too easy or even "cheating." According to the developers accessibility options are for everyone, because their goal is to provide the best possible gaming experience. This takes into account not only people with disabilities, but all players, enabling them to customize everything to get the most satisfaction from the game.

The developers also hope that the example of GoW Ragnarok will encourage other publishers to include accessibility options in high-budget games. After all, there is still much room for improvement in this regard, and Sony Santa Monica employees hope that the efforts of various studios will allow for further improvements. Especially since reaching as many players as possible is also in the interest of publishers.