Yesterday's digital launch of Grand Theft Auto: The Trilogy - Definitive Edition can hardly be compared to the announcement of GTA VI (still in the realm of gamer dreams), but one would think that it would sweeten the wait for the fans. Unfortunately, on the release day Rockstar Games' client went down, and this not only makes it impossible to buy the remaster trilogy on PC (which has been pulled from the platform's offer by the way), but also to play Red Dead Online or GTA Online.

Officially, Rockstar Games has disabled the launcher due to "maintenance" work. However, starting them on the day (or even at the moment) of the launch of a new game seems to be a peculiar move. And this is not just a short break - after nearly 20 hours, Rockstar's client is still inaccessible, and the company still hasn't announced even an approximate date (let alone time) when the "work" will be completed.

Apart from players looking for ways to avoid the non-functioning client with varying degrees of success, Internet users are trying to find out the reason for such a long "technical break". Some clues may have been discovered in the findings of dataminers. For example Ash.R from Twitter found... the missing music tracks in Grand Theft Auto: The Trilogy - Definitive Edition's files.

Officially Rockstar did not include part of the original soundtrack and indeed, selected songs are simply not available in the remastered trilogy's files. However, it turns out that at least some of these songs are still in the game files. The developers merely blocked their playback with a special script. Perhaps the licensing problems associated with the music are the reason for the withdrawal of the remastered collection from the store.

...and a "Holy Grail" with commentary by Rockstar Games

However, it wasn't the hidden songs that were the biggest surprise found by dataminers. That title undoubtedly goes to the uncompiled main.scm file, which contains all the scripts with commentary from the devs (via Vadim M. on Twitter). Reading these enables you to get a behind-the-scenes look at GTA III, GTA: Vice City and GTA: San Andreas. The findings in main.msc include the censorship of the hidden erotic minigame known from the Hot Coffee mod, the working names of locations, and - how else - the developers' regrets and confessions. The file even has its own entry on the fan-made GTA wikipedia page, and Vadim M. described it as the "Holy Grail" for those interested in the behind-the-scenes activities of the developers. 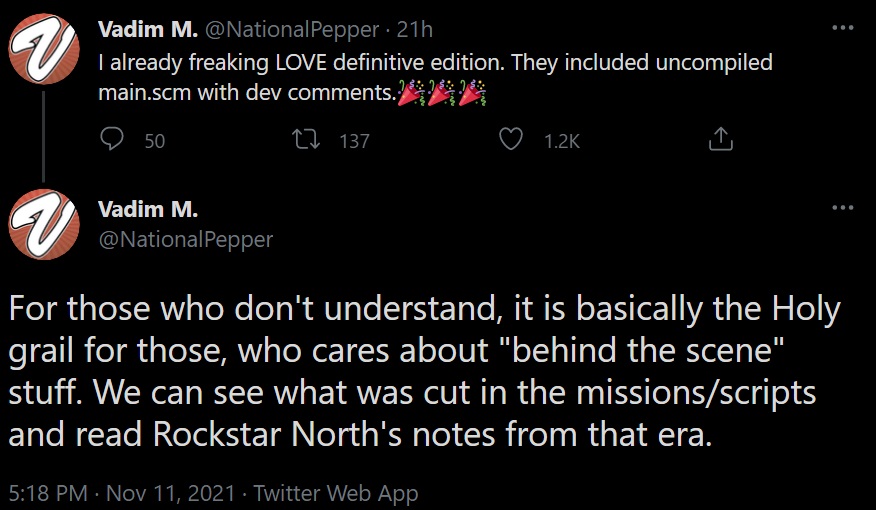 This kind of "leak" would be understandable in the case of an engine made available to fans in one form or another (Valve's Source is probably one of the more famous examples of a piece of code full of developer confessions). However, Rockstar Games is usually reluctant to share its secrets. Meanwhile, the publisher included something in the finished game that had no right to even appear in the development version (including tracks whose licenses Rockstar lost long ago).

For some internet users it proves that the devs were in too much of a hurry with the release of Grand Theft Auto: The Trilogy - Definitive Edition. We're guessing that these oversights are the reason for Rockstar's sudden shutdown of the client and withdrawal of the title from sale on PC. Not that this can be helped now that main.msc is circulating online, much to the delight, frustration, and amusement of fans.