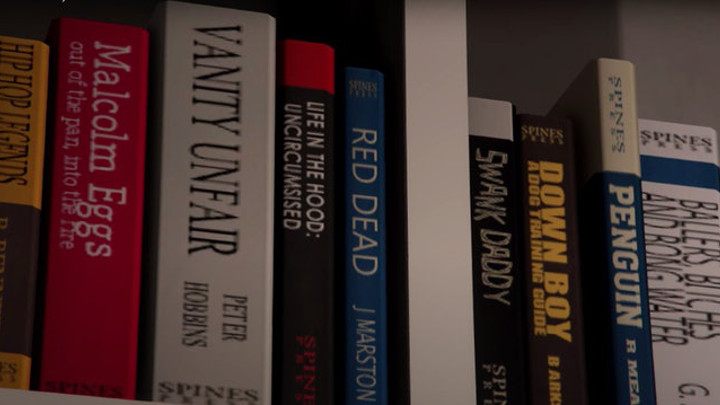 The increased interest in GTA V, triggered by the giveaway on Epic Games Store, has encouraged the players to search again for all sorts of easter eggs hidden by developers on the extensive world map and build on them complex fan theories. One of the most popular is that the Red Dead Redemption and Grand Theft Auto series take place in the same universe and cross over in more than one way.

On Inverse we can find an extensive article that summarizes the most important evidence indicating direct links between both series. The first of these is an inconspicuous book titled Red Dead, which can be found on shelves across various corners of Los Santos. Its author is J. Marston. According to the fans, this is not about John Marston, the main character of Red Dead Redemption, but about his son Jack, who has been seen many times in the course of the game engaged in the readings. What's more, the young boy also often mentioned that he would like to become a writer or a scientist. Could it be that he eventually managed to achieve this goal and become the author of a popular bestseller?

Another link between the two worlds is Francis Sinclair, whom we meet during one of the side missions in Red Dead Redemption 2. The bizarre clues left by the developers, among others in his home, enable us to deduce that he is a time traveler. Fans believe that Francis is a mystical deity named Kraff, who is worshipped by the Epsilon Program cult in GTA V. The description of his appearance (including a distinct mark on his face) corresponds perfectly to the figure of Sinclair.

The third link between the series is to be a mysterious hunter who persistently tries to track down and kill the legendary Sasquatch. We encounter him both in Red Dead Redemption: Undead Nightmare and GTA V. Character and appearance of the character are pretty similar in both games. The last link in the aforementioned article are Shann Mountains (RDR 2) and Chillad (GTA V). Although both peaks are not identical and do not even lie in the same part of the fictional United States, in both games they are a magnet that attracts various paranormal events, such as UFOs. In their vicinity, we also meet one of the two versions of the hunter.

Devs from Rockstar have repeatedly stated that they deliberately hide hundreds of different references and secrets in their works. These are often discovered many years after the original release of the games. It's no wonder that many urban legends and myths have grown up around the series, which the most ardent fans are dedicated to solving.