1C, which is working on the second installment of King's Bounty, a classic strategy game series with RPG elements, has published the first development journal devoted to it. This allows us to see how the exploration and character progression will look like, as well as turn-based battles with enemy forces.

Before we invite you to watch the video, we'd like to remind that King's Bounty II doesn't have an exact release date set yet; however, we know that this year it will be released both on PC (hereare the hardware requirements), PlayStation 4 and Xbox One.

According to the devs, the gameplay in each part of the King's Bounty series is based on three pillars, so it couldn't be any different in this case. However, the devs did not fail to introduce some changes to the series to bring a breath of fresh air.

The first pillar of the game is to explore and interact with NPCs, as well as to complete tasks. This time, we're going to be roaming the world, watching the protagonist from behind their back. Thanks to this, we have a better sense of the role entrusted to us or at least we will be given the opportunity to see various tidbits in the visited locations (in selected places we will also come across environmental puzzles).

The second pillar of the game is character progression. Our avatar will represent one of several professions (we will choose it before the game starts), differentiated in terms of abilities and preferred "way of solving problems". For example, a lawful hero is unlikely to make a deal with anarchists, as opposed to a daredevil who respects law of the fist and... well, anarchy. Interestingly enough, there will be nothing to prevent a good character from being brought down the wrong path during the game or to make a protagonist, who shoots first asks later, do some thing completely opposite. What ideals our character will follow is to depend on the decisions we make and the tasks we decide to perform. 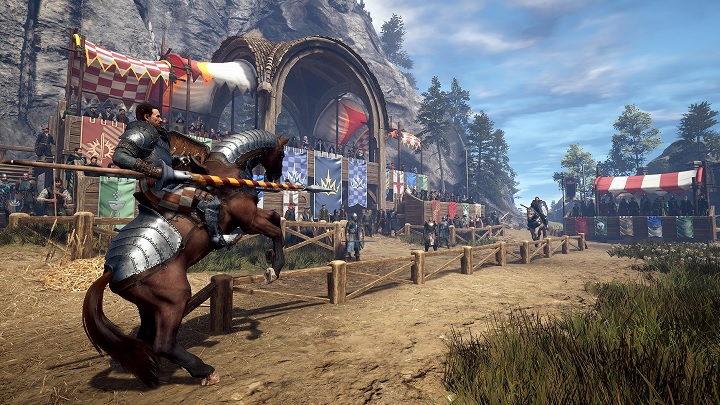 In King's Bounty II, we'll be roaming the world in a TPP view. However, once the battle starts, the camera will move high above the battlefield.

The third of these pillars is combat. As in previous parts of the series, the battles will take place in turn-based mode, on maps covered with a hex grid. This time, however, the battlefields will be fully three-dimensional, which will significantly increase our tactical options. For example, putting a tank at the head of our troops will not protect the soldiers hiding behind his back from the attack of an air unit (which will simply atack past him), while a troop of archers standing on a high flyover will have a natural advantage over the enemies stationed below. Another thing is that we won't find specially prepared arenas here - we will fight our opponents exactly where we encounter them.