Minecraft has been entertaining millions of players for over 9 years

Minecraft is a rich sandbox, which has been continuously developed since 2009, first by Notch - the game's original creator, and then by Microsoft, which bought the IP rights in 2014. Over the years after the game was released in 2011, and also before Minecraft saw the light of day, there have been many changes in the game. Today, we'll take a look at those that have affected the characters appearing in this cubic game. 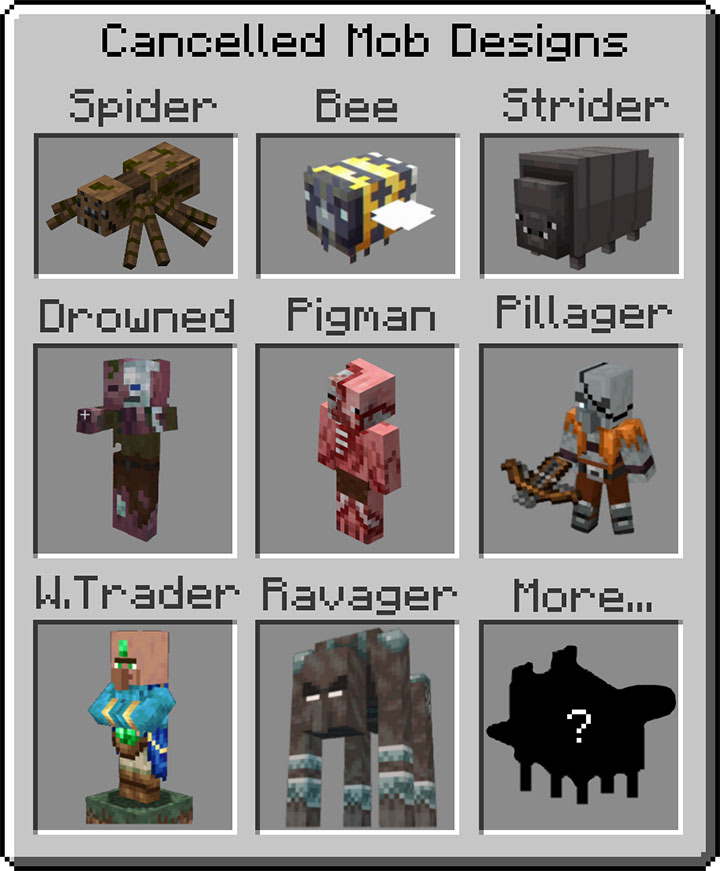 These were four NPCs created to test the basics of the game. They had no animations, moved permanently frozen in one pose. All characters were created by artist Hayden Scott-Baron and were removed from the game after he left the studio. The remainder of them is the name of the player's default character skin, Steve.

This particular mob was delayed several times and has yet to be implemented in the game. In 2011 Notch announced red dragons as flying mobs that would be less dangerous, land on the ground and unable to destroy terrain. Work on the dragons was supposed to start after the game was released, but for unknown reasons it did not happen. The topic of red dragons revived from time to time, and eventually their appearance in the game was planned for version 1.7.2. Again, however, the plans for them were not realized. Will they ever appear in the game?

In 2010, a fan concept of pigmen was created, which would settle the then relatively empty Minecraft worlds. Notch liked the idea very much. Pig people were to be introduced to the game as villagers. With time, however, they were replaced by settlers, and all that remained of the pigmen was the memory and their zombie version, which was created using the texture of the basic pigman. In version 1.16, the pig-man has undergone further changes.

A never-used mob that can be spawne with the command /summon giant. This monster uses an enlarged zombie model. Notch thought it was too powerful and took away the possibility of normal spawn. Giants have 100 life points, and their attacks usually one-shot the player.

Currently unused mob. It can be spawned with the command /summon Illusioner. It is quite a unique opponent. It can stun the player and make copies of himself - duplicates repeat actions of the original, but do not damage.

It was supposed to be an aggressive variety of rabbit, but Notch's plans for it have changed. Now it only appears in the game with the command /summon rabbit ~ ~ ~ ~ {RabbitType:99}. The rabbit attacks the players on direct contact, and if it doesn't find itself near the player, it will fight the nearest wolf. The idea for the killer bunny came from Twitter user 88bully.

In the early stages of the project, these monsters were called "Crawlers". They were designed by Jasper Boerstra - 2D graphic. Over time, the monster changed its name to "Strider" and received 2 brand new models - 6-legged and 9-legged. During the work they were named Grandpa Strider (6-legged model) and Grandma Strider (9-legged). Currently the Strider has only two legs and can serve as a means of transport for the player in the Nether, where his ability to walk on lava is particularly useful. Early ideas were to control the strider with a carrot stick, but eventually the carrot was replaced by a nether mushroom.

The initial appearance of bees was very different from the one we know today. Today their size resembles the head of the player model, but at first they were much smaller. However, the developers decided to enlarge their model to make it more charming. Their texture was also changed, with particular attention paid to enlarging the eyes.

These characters appeared in version 1.14 and caused some confusion with their disturbing appearance. However, earlier models stirred even more negative emotions. Even their name has changed, because initially they were called "Illager Beasts". However, the Pillagers who were riding them were initially supposed to look like pirates.

Almost all other creatures

There were also other cosmetic changes in the game, but these were much less drastic than those described above. Enderman had green eyes, spiders were brown, sheep had much more wool, and Wandering Traders initially had very "rich" outfits - adorned with emeralds. In the game files there is the texture of the twelfth, not present in the game cat. The early appearance of the drowned resembled a pink zombie with skeleton elements. However, the texture of the wolf was changed to lighter.

Minecraft, like other games, is constantly developing. Due to improvements, players sometimes lose some things they are used to or do not get what they are waiting for. They find out about other changes after years, because they never saw the light of day. Modern games are a continuous adventure not only when it comes to gameplay, aren't they?