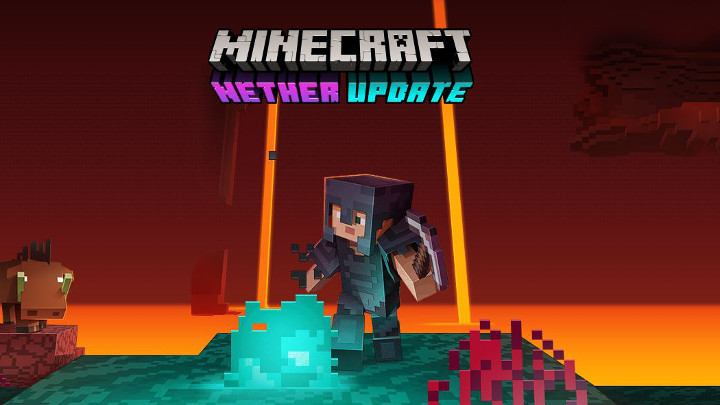 Nether Update is another big patch for Minecraft, first announced last year, during Minecon Live 2019. The update focuses on the title Nether, a dangerous dimension that we can reach through the obsidian portal. The free patch launched today on all hardware platforms supported by Bedrock edition of the game - Xbox One, PlayStation 4, Nintendo Switch, iOS, Android and Windows 10. Also the Java edition was updated, working on Windows and MacOS and Linux family systems.

Nether Update introduces a lot of attractions for adventurous players. After the update, Nether boasts a more diverse landscape, thanks to new biomes. From now on, we'll be traversing, among other things, the dangerous crimson fungus forests and volcanic basalt deltas. Dangerous hikes will be rewarded with a new material called Nether. It is an extremely difficult mineral to obtain, much thougher than diamond. It will be used to craft the best armor and weapons in the game, which will be completely resistant to fire and lava.

Hordes of previously unseen Hoglins, aggressive wild beasts will also stand in our way, which, with a bit of effort, can be tamed and bred. More intelligent opponents will turn out to be humanoid piglins, who won't attack the player when he turns out to be worthy of their attention. In order to attract their attention and gain respect, we have to wear a full set of golden armor during the encounter. Piglin love for this metal will enable us to trade with the creatures using nuggets or bars of this precious metal.

The full list of attractions in the update can be found here.