There are some multiplayer games, in which we can fight huge battles. But there are also those that focus on competition on a much smaller scale. MisBits belongs to the latter group. This multiplayer game, developed by Pow Wow Entertainment and Purple Lamp studios and published by 3BlackDot, focuses on toys waging battles in rooms, attics or bathrooms. After a closed beta period, the title is debuting in the Steam's Early Access, today at 9 AM PST. The release of the full version is planned for the summer, this year. 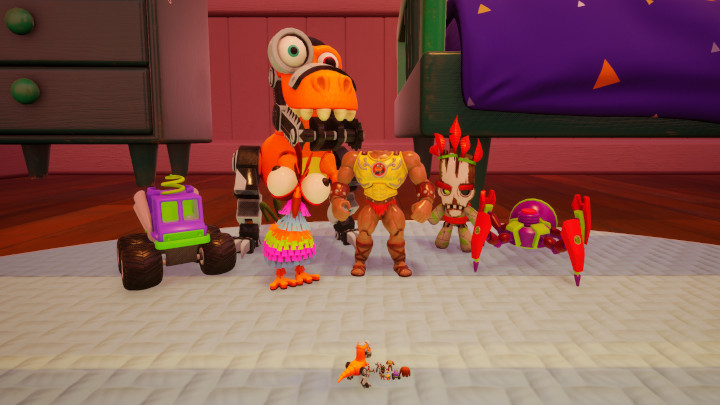 The toys are coming.

The interesting element of MisBits is the fact that we won't take full control of the toys, but only of their heads. This means that depending on the situation we can quickly change the body we use. Nothing will also stand in the way of stealing the opponent's "vehicle", which may give us some interesting tactical possibilities.

According to the developers, MisBits is to focus mainly on fast and dynamic sessions for 2-16 players. There will be five game modes at the start - Playhouse (a kind of sandbox, enabling us to discover the secrets of the maps and take part in mini-games), Deathmatch (classic competition, during which we will face the task of knocking down the heads of opponents or eliminating them completely), Team Deathmatch (the same as before, but in teams), Kick Brawl (football, a bit like Rocket League) and Arcade (with the option to take part in various challenges, changing every week on specially prepared maps). If you are curious to see how it all looks like in action, below you can watch the a six-hour stream from last weekend's PAX East event.

During the early access phase, MisBits will be continuously developed. New heads and bodies with different skills will appear in the game. Another mode will also debut - ToyBox. It will enable us to create and edit maps and other elements of the title, as well as prepare our own modes, which we will be able to share online.

Finally, if you find the above information interesting and consider buying MisBits, below we present the game's official hardware requirements. It is worth to get acquainted with them.

Webedia Group is a partner of the MisBits project, published by 3BD Games.