Fans of the Grand Theft Auto series continue to hunt for clues about the future of the series, even the most absurd ones. But what to do with a confirmation coming from a pretty reliable source? The official Twitter account of the French branch of Netflix can be considered such a source, as it features a post about the imminent debut of Grand Theft Auto VI. Do we need a better confirmation?

Netflix being serious(?) about GTA 6

If you've been following the news about GTA 6, you're probably under no illusions about the credibility of all the leaks, which obviously confirm the imminent announcement (or even launch!) of the new installment. Unfortunately, the principle of unlimited distrust applies here as well. The lack of any context and the fact that the post was published only on Netflix's French Twitter profile raises doubts about the credibility of the statement contained in the message, which looks more like a joke made by the person in charge of the account. 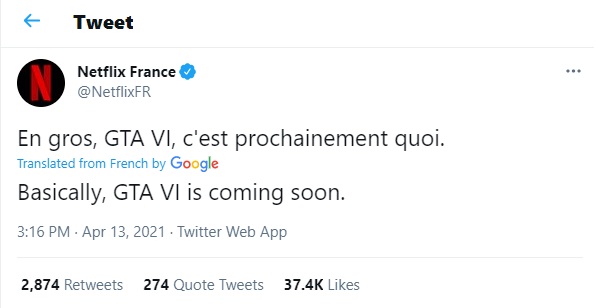 "Soon" apparently means "before the end of the world" in the French Netflix dictionary.

Further discussion seems to confirm the frivolous nature of the post. After being queried by Twitter users, the person in charge of the Netflix France account responded that the game's relase will occur "between now and the end of the world" and the game "will appear when it is ready, [because] like a series, it must be produced." All of which leads us to believe that this "information" is a joke that must have amused Grand Theft Auto fans.

"Fortunately" there's also something for those who care about a more intriguing and potentially credible rumor. As reported by the Twitter account of GTA 6 News, Rockstar Games recently updated one of its websites. It is unavailable for now, but the address has caught the attention of internet users: rockstarcartel.com. Some people linked it to the "leak" about the return to the 80s (the era presented in Grand Theft Auto: Vice City) and the atmosphere inspired by Narcos.

Unfortunately, even this "official" leak raises a lot of doubts among fans. The website itself is by no means new - it was registered on May 5, 2002, after the debut of Grand Theft Auto III on PlayStation 2 (and just before the PC launch). Of course, this could be taken as confirmation, if not of GTA VI, then of a significantly refreshed version of Vice City, but it's still impossible to treat a nearly 20-year-old website name as a teaser (unless conceived by excellent fortune tellers).

Beyond that, it could also be standard practice to refresh the rights to an old domain to prevent it from being taken over. There's no evidence whatsoever to link the website to any new Rockstar Games project, let alone Grand Theft Auto. It's another thing to wonder about the website's inaccessibility, since most of the company's old domains link to related games ( GTAV.com, for example, redirects to the GTA V section of Rockstar's games tab). 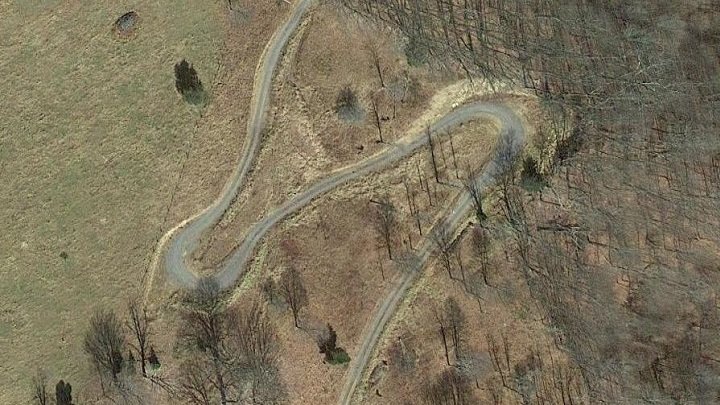 This, more or less, is the bulk of the compelling evidence for the imminent announcement of GTA 6.

Also recall that Tom Henderson, known for numerous leaks, denied that GTA VI will return to the 1980s, instead taking us back to modern times and letting us control a female protagonist. Of course, even this information is just a hearsay, and while it's not outright false, there's no reason to believe it any more than the other, often contradictory rumours floating around the web. As always, we recommend patience and waiting for official information on the future of the Grand Theft Auto series. Any leaks - even from the most reliable sources - should be treated with caution.