Things are going south for No Mans Sky, thats for sure. Considering all the troubles with performance issues and missing content, it wouldnt be much of a surprise if the game were losing players. And thats exactly whats happening, but the drop is even more significant than we would have expected  according to Steam Charts, No Mans Sky currently has fewer than 1000 concurrent players (thanks, TechSpot), whereas the 24-peak is a little over 2000. The number of players has been rapidly falling since the launch, from the all-time peak of 212,321 to what we are seeing now. Will future content updates be enough to lure the players back to No Mans Sky? 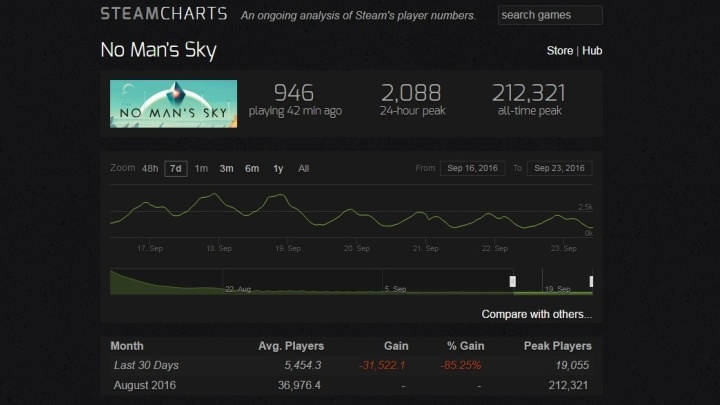 No Mans Sky on Steam Charts.

Immensely hyped space exploration game turned out to be a disappointment soon after it launched on August 9 for PC and PlayStation 4. Although No Mans Sky certainly has got an impressive huge world made up of bazillion stars and planets, there are actually few things to do there, not to mention that many of the features promised prior ot the release are missing  like streams and rivers, hacking closed doors, or reputation system.

As if that werent enough, the PC version was plagued by many technical issues. And while the optimization problems may soon be mostly ironed out, and the developers are promising to release new content over future free updates, you only get one chance to make a first impression.