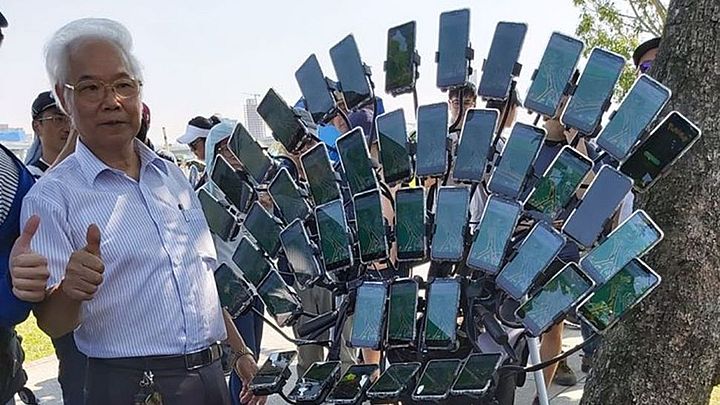 Even the Batcave had fewer screens.

If you ever thought that getting up before school and running around the woods in search of pokemon was being a real master... you were wrong. Just look at this lovely, seventy-year-old gentleman from Taiwan. If anyone deserves to be called a master, it's him. Here comes the trendsetter, the one and only Chen San Yuan - a man who rides a bike with almost four dozen phones mounted. Everything to play Pokemon Go.

He became famous last year, when it was noticed that he uses more than 20 phones at the same time to catch the lovely creatures. At that time he was just a padawan, who gained experience on the path of the Force. Now, he is the master, traversing unexplored terrain with 45 bicycle-mounted phones. Before we ask ourself a few key questions, let's take a look at the tweet below.

Now, let's go to the Q&A section, except that I expect your answers in the comments. First of all, how did he manage to mount all these phones on a rack that reminds the backrest of the famous throne from Game of Thrones? Isn't he a threat to others when driving his pokemobil? Does he see anything from behind the mosaic of smartphones? How many calories does he burn a day? And most importantly - what data plan does he use?

As you can see, there are many questions to be asked here. We'll probably never know the answer to some of them. However, if you would like to try to create a similar vehicle yourself and travel around the city, remember to first look at the OSH manual. Because when will be looking for a Charizard and somebody else might catch you. That somebody's gonna be the local police officer.

Speaking of the the police, let's remind that Pokemon Go had its launch on July 6, 2016 on iOS and Android devices.