Fortnite is not only the most recognizable battle royal game in the world. It is also a very good platform for organizing various types of events. It was proved by the screening of a fragment of Star Wars: The Rise of Skywalker and DJ Marshmello's concert. The latter event also set a record in the number of logged in players (over 10 million). The record lasted over a year until last night, when the American rapper Travis Scott virtually performed and presented his new song to the world in the popular online shooter from Epic Games. Over 12.3 million people watched the event. Let's add to that the audience from YouTube (1.2 million), Twitch (833 thousand) and Mixer (25 thousand).

Scott was very impressed with what happened last night and wrote about it on Twitter:

If you're a fan of Travis Scott and you missed his ten-minute night gig at Fortnite, no worries. It was just part of his virtual "mini-tour" called Astronomical. Here are the dates of rapper's encore appearances in Epic Games's title:

The scene is in Sweaty Sands. You can enter the concert area half an hour before the start of the concert. 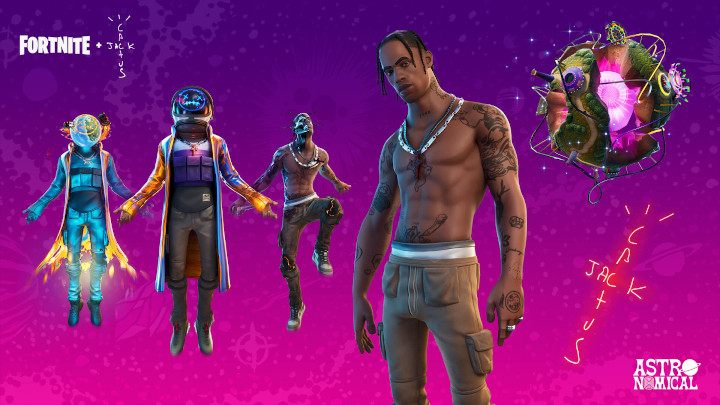 In case you are interested in Travis Scott's performance at Fortnite and you don't want to take part in the event in person, you can watch it all below. You have to admit that the setting of the concert is impressive.

If you still don't have enough attractions related to Travis Scott, special cosmetic items related to the rapper have also appeared in Fortnite. For just taking part in the concert you will receive the Cyclone Astroworld hang-glider and two loading screens for free. In addition, by finishing special challenges, you can pick up emotes, skins, etc. You will find more details here.