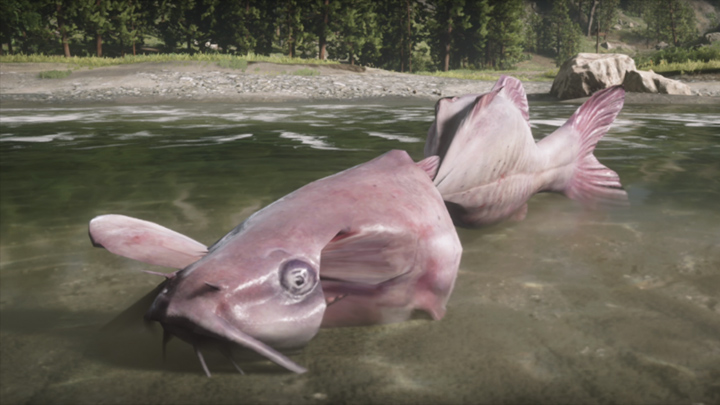 The model of the legendary catfish is clearly unfinished.

Last week a PC version of Red Dead Redemption II was finally released. This opened up new possibilities for fans, allowing them to explore the game files in search of answers to the questions that have been tormenting the RDR2 community for a year. Thanks to this, among other things, the mystery of the great catfish was solved.

The source of the problem is the official game guide, which contained information that in Red Dead Redemption II you can catch a legendary catfish weighing 200 pounds (about 91 kg for you non-imperial folks), using a special lure. The problem is that the players were unable to do it. The fish appeared in one of the adventures in which we were supposed to help a fisherman named Jeremy Gill catch it. However, the task ended with our client being dragged under water, after which he never surfaced again. You couldn't even see what the fish itself looked like. The players hoped that the completion of this task would make it possible to hunt for the catfish, but nothing like that happened.

Stubborn fans have been trying to find a way to catch the catfish for months. These players threw themselves at the PC version and when analyzing the files they finally found the legendary fish. It is possible to force the game to spawn it, but the model of the animal is clearly unfinished and there is no way to catch it. So it seems that Rockstar Games initially planned to enable us to catch the legendary catfish, but eventually abandoned the plan, and the people responsible for the guide did not know about this change.

The mystery of Gavin was solved in a similar way. In this case, the players have also been trying to find the character since last year, encouraged by the comments of his friend Nigel. File analysis showed that Rockstar Games prepared a model for Gavin, but didn't use it in the game.

The solutions to both puzzles are therefore disappointing, as they indicates that initially the developers had more content in their plans, but ultimately could not implement all of their ideas. Nevertheless, it is good that thanks to this, fans can finally stop wasting their time on, as we already know, pointless searching.

Recall that Red Dead Redemption II debuted on the PC on October 5, this year. The game is currently available only in Rockstar Games Lancher and Epic Games Store. Next month the title will appear in Steam, but the exact date hasn't been announced yet. The PC debut was not without many technical problems.

Bug in Facebook App Switched on the Camera Without User's Knowledge