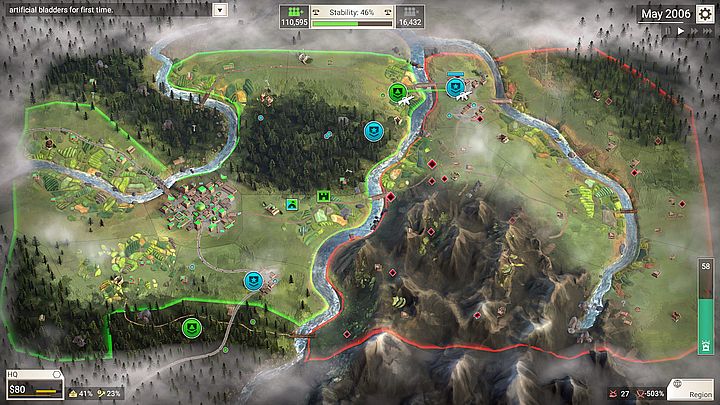 In the game, we will have to control the chaos of the battlefield.

At the beginning of this year, Ndemic Creations, known from such productions as Plague Inc. and Plague Inc.: Evolved, released a mobile game Rebel Inc. Players liked the title, so now (as in the case of Plague) it will be available on personal computers. Of course, in an expanded and improved version called Rebel Inc: Escalation, which will be adapted to the capabilities of PCs. The game will be available in theSteam Early Acces in October (at a price of $15, and the price will rise with new content), and the official launch will take place next year (you can already add it to your wish list). Below, you will find a trailer for the game.

Rebel Inc: Escalation is a strategy game in which our task will be to stabilise a country torn apart by war, bearing in mind its civilian and military priorities. The title will combine original gameplay with important new features in the PC version, such as story campaign, multiplayer mode, Steam Workshop support and improved graphics. The creators inform that at the beginning of the early access we will get 5 regions, located in various environments of a world inspired by Afghanistan. In addition, we will have 6 governors divided into special classes (economist, smuggler, etc.) and an artificial intelligence of enemies and allies to ensure the right level of challenge.

Naturally, most mechanics will be improved until the official release. Creators will add new regions, campaign mode, local co-op and multiplayer. An interesting option will also be original scenarios, which the players will share with other users. Of course, this is not all, and a full list of new features and changes can be found here. At the time of the appearance of the game on Steam, we learned the recommended hardware requirements of the game. You can read them below.