June was marked by industry showcases of upcoming titles. The shroud of secrecy was then revealed by all major companies - in addition to Sony. Although it has long been rumored that this Japanese corporation is planning a major presentation of games dedicated to the PS4 and PS5, the event has not yet been officially announced or even hinted at.

Sony gearing up for August?

This creates space for all sorts of rumors, gossip and conjecture. The source of the most recent such information is Nick Baker - co-founder of XboxEra.com and co-host of the XboxEra podcast on YouTube, known on Twitter under the pseudonym Shpeshal_Nick. In one of posts on the aforementioned website, he recently wrote that he had reached out and learned that Sony is planning to hold such a show in August 2022. 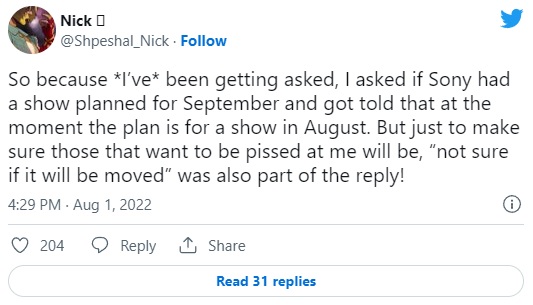 PlayStation Showcase instead of State of Play

Since there is talk of a large presentation, one can guess that this is about the PlayStation Showcase, not a "regular" State of Play. The catch is that in previous years these events were usually held in September, not August. Of course, this year Sony may want to make an exception to the rule - if only because The Last of Us: Part I is coming out on the PS5 on September 2.

Risk of delay to September

However, it is possible that the show will nevertheless be held traditionally in September. Nick Baker eventually admitted that his sources are not one hundred percent sure that the event will not be rescheduled for the first month of autumn. At the same time, it is worth remembering that Shpeshal Nick's reports vary in reliability - sometimes they come true, other times they do not. Therefore, it is better not to hope too much and wait for an official announcement from Sony.

PlayStation Showcase 2022 - what to expect?

And what can we expect from this alleged PlayStation Showcase? If not the remake of The Last of Us, then certainly Sony's upcoming hit, which - with a high degree of probability - will turn out to be God of War: Ragnarok, scheduled for release on PS4 and PS5 on November 9. And beyond that? Who knows? Maybe a longer trailer for Marvel's Spider-Man 2?