Looks like the mystery of the bizarre console has been solved. Matthew Stott from Codemasters referred to the information that circulated yesterday on Twitter. He stated that the published diagrams represented nothing else than than a development version of the PS5 console.

"Its a dev kit, we have some in the office," admitted Stott in the post. One can assume that Sony didn't like what he did, because the tweet was soon removed. 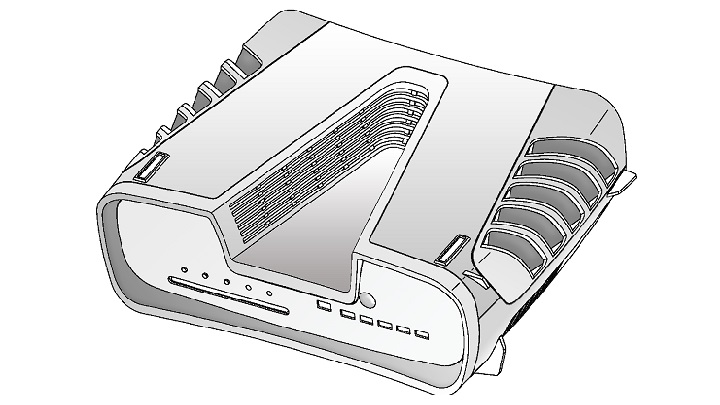 What a beautiful grill. Source: LetsGoDigital.

PlayStation 5 is a long way from being released, but for some time now there has been more and more news about its features, specifications and games. This time, the Internet found something that could present the potential appearance of the upcoming console - a schematic attached to the patent prepared by Sony.

The patent in question was sent in May and registered on August 13. It's about a Sony electronic device, and its documentation shows a console-like design, which at the moment may be nothing else but a PS5. LetsGoDigital has published illustrations and patent information on its website.

As we can read on the website, the patent was registered in the office of the World Intellectual Property Organization, and its applicant is to be Sony's technical director, Yasuhiro Ootori.

The diagram showing the device looks quite surprising - it has a V-shaped gap in its body (it is possible that this is a reference to the Roman numeral five). In addition, the front of the device shows several USB ports, buttons and a narrow slot for discs.

The device has a very extensive ventilation system, which should not be surprising if you look at how large a jump in terms of computing power is announced with the PS5, compared to the previous generation of consoles.

The final products usually differ greatly from the patented schematics, so it is possible that this is some early conceptual version of what the PS5 is supposed to be. Sony, however,likes to physically represent the generation number on its consoles, so it is likely that the appearance of the new model will go in this direction.