Re-Logic, the devs of Terraria, have finished supporting the title after many years. The last update is called Journey's End. The patch was originally supposed to come out last year, but the delay did not affect the interest of fans. Since yesterday, the title has maintained its position among the top five most popular games on Steam, with almost 487 thousand people playing at the peak of activity. No wonder, because many changes have been implemented into the title and their list is 45 pages long. Therefore, in order to put tabs on everything, the developers created a forum, which, however, is currently overloaded. 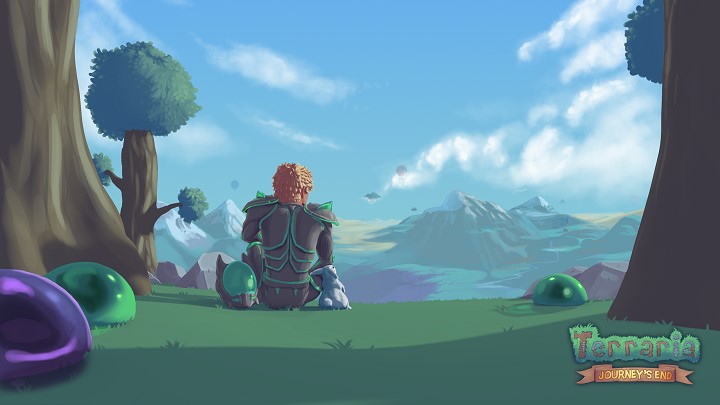 To celebrate the release of the update, the devs released several new wallpapers. Source: Re-Logic.

The patch introduced many novelties. The players will surely be glad that the title has been enriched with 800 items, as well as new enemies. Along with unprecedented threats, from now on Terraria also has a built-in bestiary - the more enemies we kill, the more we learn about them.

The changes have also affected the game world itself. The process of generating the maps has been rebuilt and new minibiomes have been added. Building a base also made more sense. From now on, the settlements with a minimum of 3 residents are being transformed into cities, where we can build fast travel points, if the settlers are satisfied. However, people encountered during our trips have become more picky - they now have preferences as to where and in whose neighborhood they want to live.

The players now have a wider range of options when choosing the difficulty level. Terraria has been given the equivalent of the creative mode from Minecraft, called Journey, in which we can build and explore the world without any obstacles. Moreover, the update has added a new difficulty level - Master. It is supposed to put even the most seasoned fans to the test.

Of course, there's even more changes, e.g. all those who are bored with standard gameplay will be able to play a game of golf, but it is impossible to list them all here. We would like to refer those interested to the game's forum (as soon as it is back online) Everything seems to indicate that the last update is a beautiful goodbye from the devs to their game.