Since May we have heard little about Gollum, who is to return in a new Lord of the Rings game. The fact is that the creators did not reveal much about the upcoming title either, additionally did not improve the fans' mood. Fortunately, their patience was rewarded by IGN. The website's American editorial staff not only interviewed the devs, but also shared the first teaser trailer of The Lord of the Rings: Gollum. We've posted the video below, while the details disclosed by Daedalic Entertainment's employees can be found later in this text.

In an interview for IGN, Martin Wilkes (chief designer of the game) compared The Lord of the Rings: Gollum to the Prince of Persia series. During the game we will often have to show off our acrobatic climbing skills, like in the adventures of the Prince of Persia. Of course, there are significant differences. Gollum is not a warrior like Talion from Middle-earth: Shadow of War and definitely does not seek open clashes with Mordor folk. Most of the time we will try to sneak past the enemies, as if in a typical stealth game. From time to time it will be possible to eliminate the guards silently, using objects, elements of the environment, and sometimes with the help of other creatures. However, it won't be easy, and it's always supposed to carry a lot of risk. 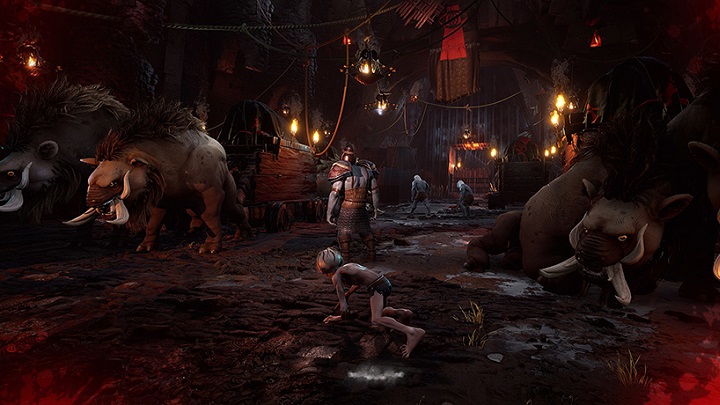 Combat will be put into the background in Gollum's adventures.

The game will be distinguished from Talion's adventures by the structure of the world. The Lord of the Rings: Gollum will be divided into stages accessible from the main hub locations. Some of these locations will give us a lot of freedom of exploration, others will have an essentially linear structure, although there will be no lack of alternative paths to the goal. Moreover, not all levels subordinate to a given location will be available from the beginning. Often we will have to find a way to get to more guarded places, either as a secret passage or through key information.

The Lord of The Rings - J.R.R. Tolkien or Peter Jackson?

After the announcement of The Lord of the Rings: Gollum it was not clear what would form the basis for the story told in the game. Daedalic Interactive might as well have relied on J.R.R. Tolkien's canon as well as Peter Jackson's two film trilogies, or departed from both like the Talion saga. Tilman Schanen, who is responsible for the plot, confirmed that the title is being created as a game under license from Tolkien's books, although the creators do not completely discard the cinematic output of Lord of the Rings and Hobbit. These have had a considerable impact on popular culture and the developers do not want their vision of Mordor to stand in complete opposition to Jackson's works. This should not be a problem, given the common source material of the game. Nevertheless, concessions to films will have their limits. The Black Tower of Barad-Dur will indeed be a tower, not a wide fortress known from the cinemas, even though (as Schanen stressed) books allow for such an interpretation. The studio will also add a lot from itself, somewhat out of necessity - Tolkien did not dwell on the fate of Gollum before his appearance in the trilogy. 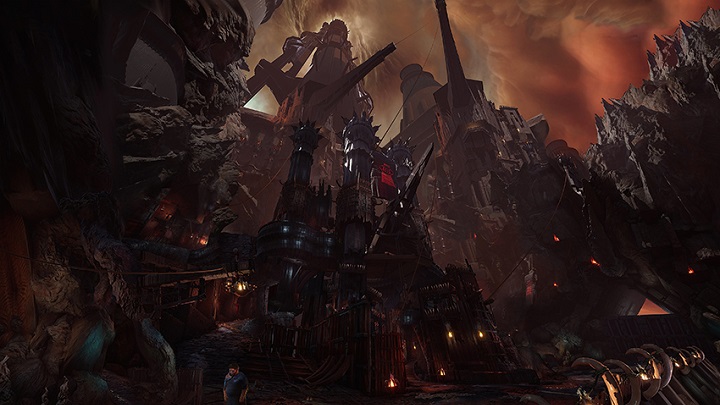 The creators of Gollum appreciate Peter Jackson's films, but they rely on the original canon.

This approach can also be seen in the appearance of the title character, who aroused some criticism from fans a few months ago. Gollum from the game does not look the same as his film equivalent played by Andy Serkis. Mathias Fischer, the artistic director of Daedalic Entertainment, explained that this is a deliberate move. The creators wanted the players to immerse themselves in the character despite everything. Hence Gollum's less ghostly and not so bald project.

Sticking to the book canon as far as possible, means that the authors don't have much freedom when it comes to the ending. But they can be creative in showing Gollum's path to where we meet him in Tolkien's trilogy. The course of the adventure will be influenced by the player decisions, taking form of the character's two personalities: Gollum and Smeagol. Both will suggest their own dialogue options, and the more often we choose the statement of one of these personas, the more it will become dominant. In practice, this will translate into animations, ambient sounds and, of course, conversations with NPCs. From time to time the influence of Gollum or Smeagol will also be reflected in the gameplay. 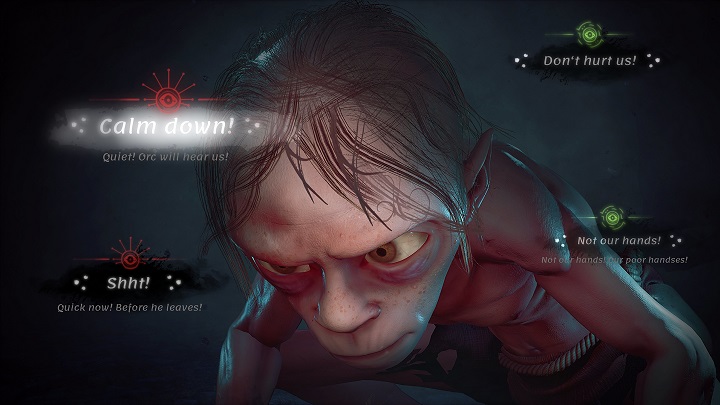 The choice of dialogues will not be black and white.

The creators stressed that the system will not be a simple choice between good Smeagol and bad Gollum. Players will have to switch between the two, not always successfully. Martin Wilkes described it as follows:

"It [the decisions - editorial note] is not as simple as, 'Choose Sméagol to be good, choose Gollum to be evil'. Our first rule is to stay true to the character (or our interpretation of him at least). Since you play two personalities in one character, choosing sides will give you some control. But it's more like maneuvering a truck with two flat tires and trying not to drive it off a cliff."

As you can see, Daedalic Entertainment has a clear picture of what Gollum's virtual adventure should look like. We'll find out whether it was correct only after the game's release. The Lord of the Rings: Gollum will debut next year on PCs, Xbox Series X and PlayStation 5, and we'll probably get some gameplay videos before that, but for the time being, let's keep it quiet.