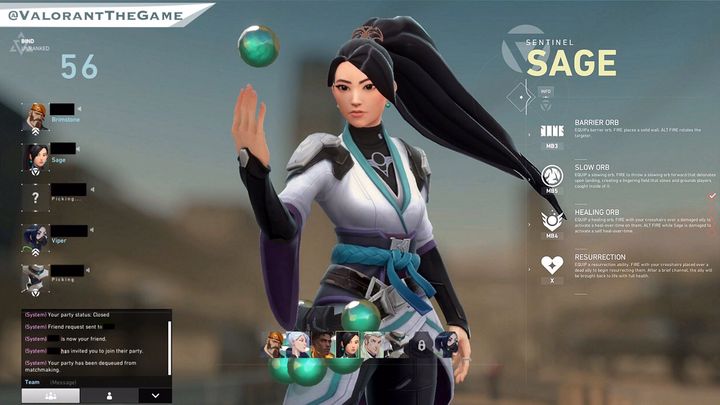 Is this what one of the characters in Project A / Valorant looks like?

Recently we reported that the online first-person shooter Project A, developed by Riot Games, the developers of League of Legends, will probably be called Valorant. Today we have another leak that confirms previous information - a character screenshot with the @ValorantTheGame tag in the corner.

Additionally, we got to know a number of details about the presented heroine - Sage. She is supposed to have four special abilities, as seen on the screenshot: Barrier Orb (creates a defensive wall), Slow Orb (enables us to slow down enemies), Healing Orb (heals allies) and Resurrection (enables us to resurrect a fallen character). Sage is classified as defense character. Additionally, the screenshot suggests two more characters, Brimstone and Viper, which may appear in the game.

It's worth recalling that Project A will be an online shooter that will combine classic Counter-Strike gameplay with Overwatch-like class mechanics. The production was announced last November, along with several other games. We don't know the release date for the title yet. One of the fan accounts on Twitter suggests that Valorant will be presented on March 2 and that beta-tests will start on March 4.

It should be noted that the information on both the title, characters and reveal date come from leaks and have not been officially confirmed, so they should be handled with care.

Baldur's Gate 3 Will Enable us To Romance Every Party Member