Warhammer 40,000, the popular SF universe known from tabletop wargames and pen&paper RPGs with strong fantasy elements supervised by Games Workshop, has already visited the digital entertainment industry many times. It's enough to mention Dawn of War or the Battlefleet Gothic: Armada series. Soon, another game will join the long list of games set in this universe. Black Lab Games (whose resume includes Battlestar Galactica Deadlock) and Slitherine have announced Warhammer 40,000: Battlesector. You can watch its trailer below.

Warhammer 40,000: Battlesector will be a 3D turn-based strategy game. In the game, we'll get the opportunity to take control over our own army of space soldiers, led by powerful heroes and units able to perform superhuman feats, and lead them to victory. The ultimate triumph can be achieved by using a variety of skills, devastating weapons and, of course, the right tactics.

Warhammer 40,000: Battlesector will feature a single story campaign, divided into twenty missions. Within it, we'll take part in events taking place after the huge battle known as Devastation of Baal. During them we will help sergeant Carleon and his allies to clean the moon known as Baal Secundus from Tyranids and defend the honor of the Blood Angels chapter.

The title also offers a skirmish mode, in which we'll be able to polish our skills relatively stress-free, and multiplayer, both online and local. More details can be found on the game's page on Steam. 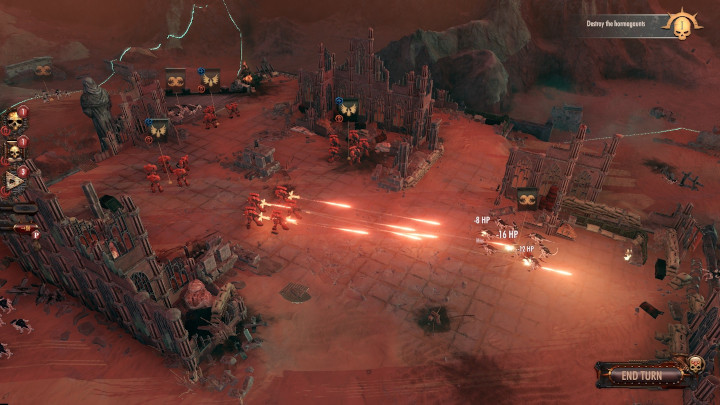 There should be no shortage of exciting battles in Warhammer 40,000: Battlesector.

Warhammer 40,000: Battlesector will debut on PC in May 2021. However, we can already sign up for beta tests. Registration is available here.

There are also plans to release the game on PlayStation 4 and Xbox Ones. These versions are to have their release this summer.