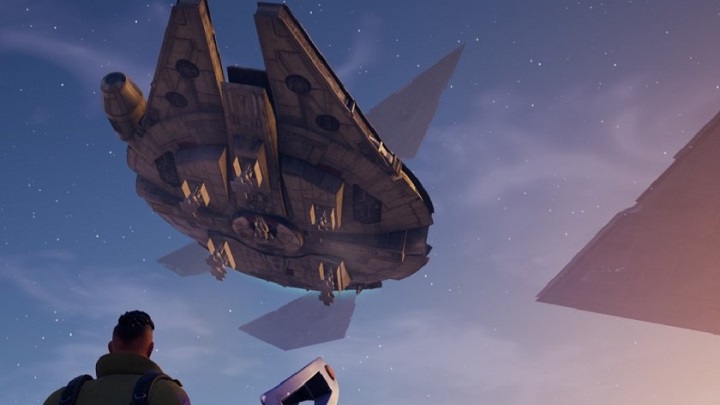 The Millennium Falcon came to Fortnite for a moment.

Yesterday, in the online shooter Fortnite: Battle Royale, a short scene from the upcoming Star Wars 9: The Rise of Skywalker was shown. The premiere was not without technical issues. The event was planned for 1:30 PM ET, and the location could be reached half an hour earlier. Not everyone managed to do it, however, because the event enjoyed a great deal of interest, quite beyond the capacity of game's servers. Eventually, the screening was postponed by ten minutes to give everyone a chance to log in.

At the right time, the Millennium Falcon arrived at the specially prepared airfield, from which two characters emerged - the Stormtrooper played by Ben Schwartz and the director of the new part of Star Wars J.J. Abrams. Geoff Keighley, the organizer and host of The Game Awards, also joined the two of them in the form of a hologram.

After a short conversation, it was time to show the clip. You could see the main heroes who made their way to the enemy base, where they came across enemy stormtroopers. The scene itself was a bit disappointing, because not only it was very short, but we also already had a chance to see its last few seconds on the November trailer. Above, you will find a recording of the entire event available on Top5Gaming channel on Youtube, and below you can watch the scene from the film.

After the screening, the players could choose their favorite color of lightsaber, but the fun was interrupted by the attack of fighters and the organizers were forced to flee. The players were left alone, but after a while they were given saber of their chosen color, which allowed them to start a battle. It is worth noting that the items now also appear randomly in loot boxes during the game. They can be used, for example, to deflect enemy missiles. Each participant also received a glider in the form of a TIE fighter.