As is widely known, Microsoft is rather reluctant to share hard data on the number of console units sold. This gives plenty of room for all sorts of market analysis companies to get their hands on it. One of these is Ampere, which recently published its latest report (via GamesIndustry.biz). According to the report, 6.7 million Series X/S units were shipped to gamers by the end of September this year. As for the PlayStation 5, by the last day of September 12.8 million units of this device were distributed (which is about 600 thousand less than Sony stated in the official report). 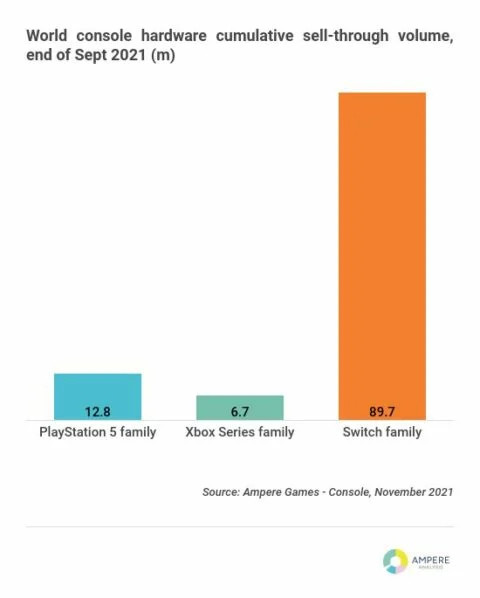 On the other hand, in the third quarter of 2021 alone (that is, from July to September), consoles from the Nintendo Switch family took the number 1 spot. The company moved 3.91 million units during that period. The PlayStation 5 came in second (3.24 million units), and the Xbox Series X/S came in third (1.36 million units). As Ampere's Piers Harding-Rolls points out, the good result achieved by the PS5 between July and September is due to a significant improvement in the volume of shipments. 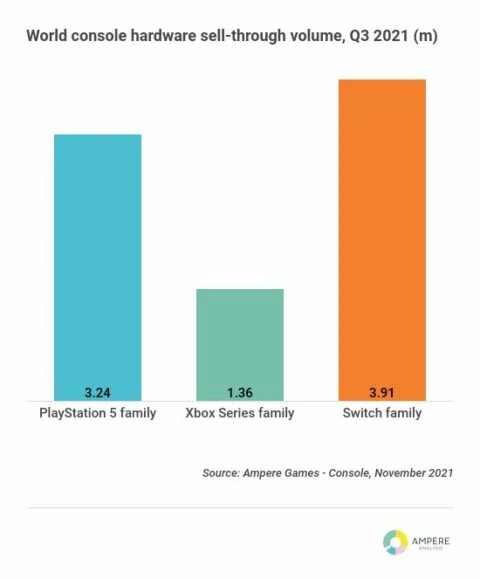 But that's not the most interesting data in Ampere's report. It also reveals that in some "key markets" (unfortunately unspecified), Xbox Series S, that is the slightly weaker version of Microsoft's console offering only digital games, has sold better than its more powerful brother, the Xbox Series X. It can be seen that the fans of the Redmond giant's platform are increasingly moving away from games on physical media (which is not particularly surprising if we take into account the existence of Game Pass). This is also confirmed by GSD data. According to them, over 90% of Call of Duty: Vanguard copies bought on consoles were sold in digital form.

Finally, two more words about PlayStation 4. According to Ampere, sales of this console dropped much faster than estimated, and that means it's unlikely to enjoy the same long-term success as the legendary PlayStation 2, which sold quite well even after the release of the third incarnation. The fact that PlayStation 5 supports backward compatibility is likely to be a significant factor in this.