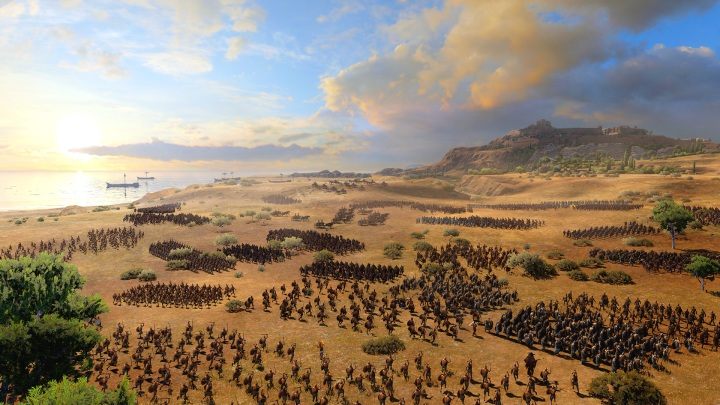 What is Total War Saga: Troy?

It's the fourteenth installment of the popular Total War strategy game series and the second part of the Total War Saga sub-series, focusing on shorter periods of history than the games of the main series. Creative Assembly, which has been responsible for creating Total Wars since the series' inception in 2000. After recent visits to ancient China and the British Isles from the 9th century, this time, we will be in the midst of the legendary Trojan War.

Traditionally for the series, gameplay happens on two plains. First, we have turn-based gameplay on a global map, where we run our empire  take care of diplomacy, trade, administration, or recruitment. The second is about the control of huge armies in real-time battles. Although the game will feature units that reference the ancient mythology, the game will not venture into fantasy  for example, the Minotaur will turn out to be a huge warrior clad in a helmet in the shape of a bull's head. You will also have to make sure the Greek gods smile upon you, for it will secure certain tangible benefits.

Will Total War Saga: Troy be available for free?

The publisher of Total War Saga: Troy, Sega, signed an agreement with Epic Games under which the game will be available for purchase exclusively in the Epic Games Store for an entire year. Most importantly, for the first 24 hours after launch, the game will be available free of charge  the title will remain available in our library even after this period. We don't yet know how much the production will cost once this unusual promotion is completed.