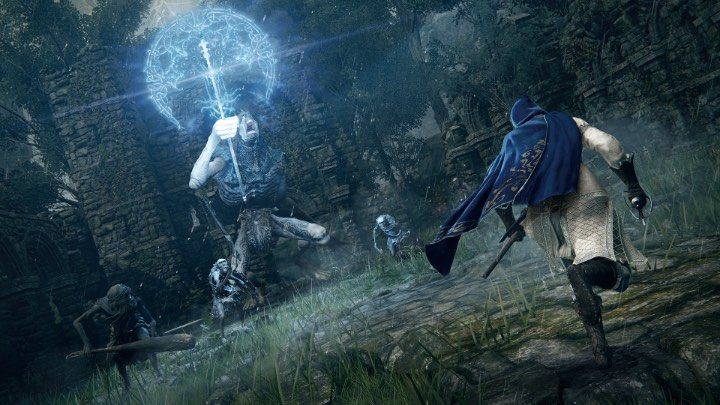 FromSoftware probably did not surprise anyone by making another Dark Souls, with a different title – they basically created the genre themselves, and they're definitely in their element here. Although there are quite a few novelties that make the game more approachable, including in world exploration, the essence of Souls, i.e. hellishly difficult bosses that look like they came from the darkest nightmares, remain an integral part of this production. It's said that even the author of Game of Thrones contributed to this universe, but you have to make an effort to notice it, since the lore is as opaque as ever. The plot in Elden Ring is extremely elusive, and it comes down to the player's determination to uncover it.

Souls fans instantly fell in love with the new version of their "dying simulator," especially praising the open world, which is another new element in FromSoftware's games, enhanced by a powerful mount. The exploration of this vast and diverse world is pure pleasure, especially since it comes without the ubiquitous markers known from other games, and the location design is absolutely spot-on. As always, there's also a demanding, yet rewarding combat system with finishers, and the difficulty level is a bit more forgiving thanks to the freedom of traveling in the open world and a system of additional checkpoints. The Elden Ring is perhaps the best soulslike game, and also the most affordable – without a noticeable reduction in the challenge.

So I fully accept Elden Ring as a soulslike, and I adore him for what he did with the concept of the open world and its gradual, devoid of obtrusive instructions exploration. [...]

I haven't had so much fun in an open world since Red Dead Redemption 2 . Its specificity meant that The Legend of Zelda: Breath of the Wild has a new cousin, equally beautiful. We will remember the open world of Elden Ring for a long time, putting it on a gaming pedestal next to the two above-mentioned masterpieces (I can call them that at the moment).

It's also the soulslike that probably caused me the most pain. Endgame bosses are hell and a test of patience, but fans of high difficulty clashes will be thrilled.

Despite all of us playing the same game, what we experience in Elden Ring will be unique to each of us, and that is where the crux of its power lies. It is these differing experiences and its powerful emphasis on discovery that make Elden Ring a game that is worth discovering for yourself. Many will appreciate it, few will master it, but all will acknowledge it as a distinctive adventure that is as rewarding as it is dangerous.