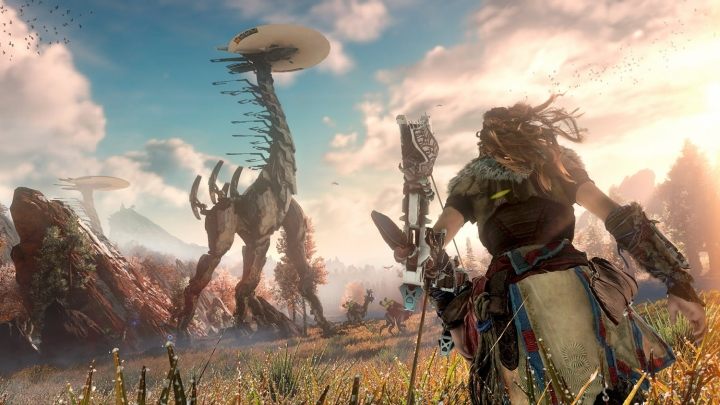 Cybernetic life has dominated the world of the future. Mankind prefers to take refuge in enclaves unaware of its past. Aloy has to confront both of them to regain her identity.

Since the release of PS2, the Dutch team of Guerilla Games has strived to earn the status of recognizable developer for the PlayStation brand. Despite the fact that Killzone series is, without a doubt, recognizable among fans of console shooters, a lot of water had to flow through the Amsterdam canals before the developers have finally managed to reveal their major hit, which turned out to be Horizon Zero Dawn.

The story follows the character of Aloy. She is a warrior of one of the primitive tribes of the future that have been created after the civilization had been destroyed by rebellious artificial intelligence. The girl's main task is to discover the truth about her origins and, by the way, to save the world from the upcoming return of sinister machines.

The story depicted in Horizon doesn't sound particularly exciting, but the title offers fantastic graphics which spreads its wings even further on PlayStation 4 Pro. Lots of details, razor-sharp textures, and the very idea of making Aloy a mechanical-monster hunter that uses a variety of weapons and tricks in order to work effectively – that was a bull's-eye. Admittedly, the NPCs that appear during the dialogues are a little bit artificial, but you can turn a blind eye to it and simply enjoy the possibilities offered by the interesting mechanisms of this sand-box experience of the highest quality.