Shin Megami Tensei: Persona 5 for PS4, PS3 and X360 is the latest entry in the popular Japanese RPG series, Persona, which is a sub-series of the bigger Megami Tensei franchise. Responsible for the games production is, once again, an in-house developer studio of the Atlus company, consisting of the creators of previous parts, like lead designer Katsura Hashino, composer Shoji Meguro and chara designer Shigenori Soejima.

The plot once more puts us in a role of an ordinary high school student, who finds himself in possession of supernatural powers. With his newly discovered abilities he needs to face the forces of darkness. The game follows a typical jRPG pattern, with our hero being relatively weak at the beginning, so much of the gameplay focuses on gaining experience points to develop our character.

Persona 5 guide focuses on the most important aspects of the gameplay. Our guide will brief you on things like Persona creation, time management, or the right answers for school tests. Separate chapters are dedicated to romances, achievements and choices. Will Persona 5 be playable on PC? Here's what Atlus has to say

Atlus has been very protective of Persona 5, which most recently led to blocking the game from a popular PS3 emulator for Windows. Could they be planning a PC version of Persona 5?

Atlus studio is well known in the jRPG fans' environment. It is responsible for creating Shin Megami Tensei games and its popular Persona spin-offs. For years they have been available only for stationary and portable consoles.

Here are today's topics: new drivers from AMD, the number of Humble Monthly subscribers and the mysterious Persona 5 S project's teaser site. Here's your daily batch of short news from the world.

Atlus reveals a teaser for Persona 5 R, apparently coming to PS4 in March 2019. 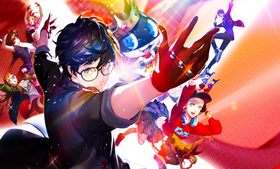