In recent days, those impatiently awaiting Mount & Blade II: Bannerlord, the full-fledged sequel of the popular action RPG with strateg game elements from 2008, receive only good news. First they could watch the gameplay footage from the Skirmish mode, then they found out that the title will be available in Steam early access in March next year, and finally they got the opportunity to sign up for closed beta-tests of the multiplayer mode. However, this is not the end of attractions. Almost 30 minutes of gameplay appeared on Rocket Beans TV Gaming channel; the footage comes from the demo of Mount & Blade II: Bannerlord, which TaleWorlds prepared for gamescom 2019. The footage is commented by the creators. You can watch it below.

The demo shows gameplay from the single player mode. We can see here things characteristic for previous productions from the Mount & Blade series, although of course improved accordingly. As usual, we have to move our army around the world map, visit cities and villages, trade, recruit new warriors, talk to NPCs, take part in spectacular battles for hundreds of warriors and castle siege. The last element that has undergone a clear transformation and is much more extensive than in Warband. In addition, the creators shared some interesting information not directly visible on the gameplay. We heard a few words about politics, marriage and the creation and progression of our hero or heroine. 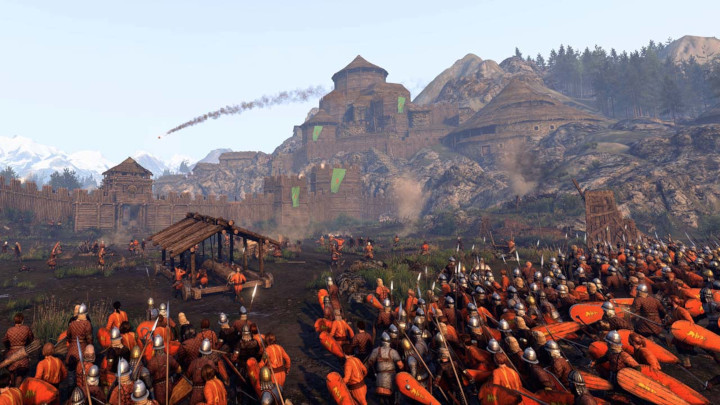 The sieges in Bannerlord will be more impressive and complex than in the original.

Heading exclusively for PC Mount & Blade II: Bannerlord has been in production for eight years. This is a very ambitious project of the independent Turkish studio TaleWorlds. Although some of the initially planned elements slightly exceeded the developers' capabilities and ultimately will not appear in the game, such as the option to build castles in the villages owned by the player, many players and industry journalists already think that the whole thing looks very interesting. We can only keep our fingers crossed so that the finished product meets the expectations of the fans.