Last Wednesday, AMD officially launched the Radeon RX 6000 series (6900 XT, 6800 XT and 6800). Just a few weeks ago, few people believed that AMD's new chipsets would be able to compete with the best models of the GeForce RTX 3000 series, but AMD feels confident enough to publish more benchmarks results after the release. They look very promising. Twitter user Harukaze5719 summarized the average performance against Nvidia's top cards in graphs - here they are: 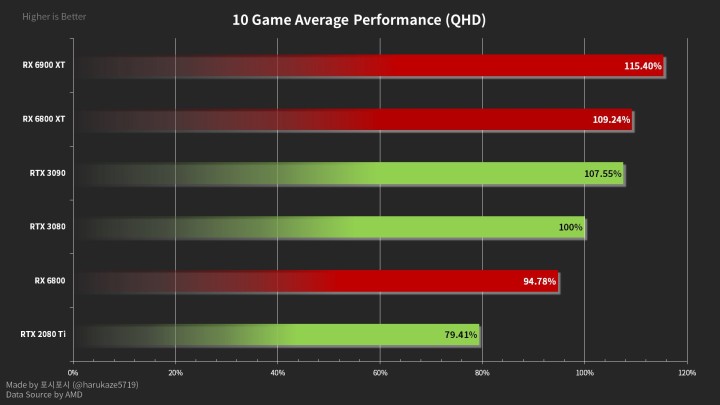 Average performance in 1440p, based on 10 games selected by AMD. Source: harukaze5719's Twitter. 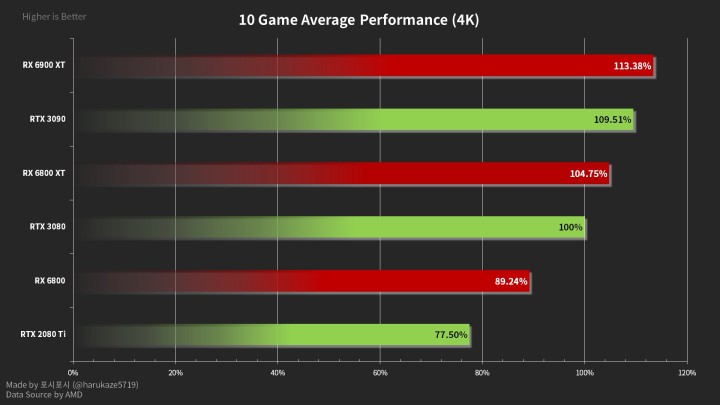 Average performance in 4K, based on 10 games selected by AMD. Source: harukaze5719's Twitter.

Performance results published by AMD include ten games such as Battlefield V, Doom Eternal, Call of Duty: Modern Warfare or Wolfenstein: Youngblood. In five Radeon RX 6900 XT titles, Radeon RX 6900 XT proved superior to the much more expensive GeForce RTX 3090, both in 4K and 1440p. The weaker cards, RX 6800 XT and RX 6800, also perform very well against GeForce RTX 3080 and RTX 2080 Ti respectively, often overtaking them, as you can see by comparing the frame rates in the table below (we've gathered all the data from the graphs available on AMD's official website).

However, the choice of games was not accidental, e.g. BF V or Forza Horizon 4 definitely favour AMD Radeon. It should also be noted that in the conducted tests AMD Smart Access Memory function was activated using the full potential of the GPU memory. Thanks to it the performance can be increased by up to 11% on a PC equipped with Ryzen 5000 processor and motherboard based on 500 series chipset (B550 and X570). Therefore, when using legacy AMD chipsets or Intel hardware, things will no longer look so good. 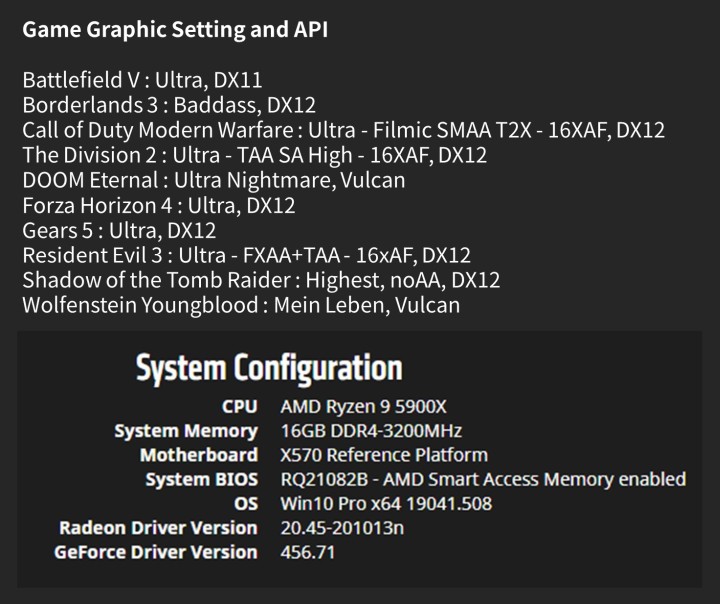 Here are the hardware and graphic settings that AMD has used in tested games. Source: harukaze5719's Twitter.

If you've watched a presentation of RX 6000 Radeons, you know that the topic of ray-tracing was basically ignored. Does this mean that AMD doesn't have anything to brag about in this respect? Not necessarily. As the latest leak suggests, the performance of Radeon RX 6800 in Shadow of the Tomb Raider with active ray-tracing is better than we might think. The card, in combination with AMD Ryzen 5 3500X six-core processor and 16 GB of RAM, has achieved 46 and 80 fps at 4K and 1440p resolutions respectively. Wccftech benchmarked Eidos Montreal's game on competitive GeForce RTX 3070, achieving 38 and 74 fps (54 and 85 fps when DLSS was enabled). It looks like AMD may have nothing to be ashamed of. However, we have to wait until mid-November for independent benchmarks. We would like to remind that Radeon RX 6800 XT and RX 6800 will debut on November 18, while Radeon RX 6900 XT will debut on December 8. 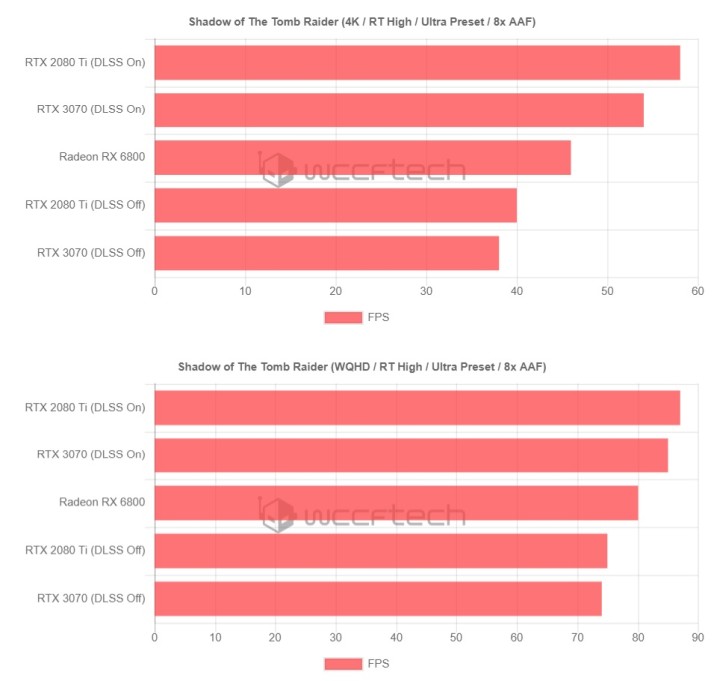 Watch Dogs: Legion and AC: Valhalla With Native 4K Only on PC

Watch Dogs: Legion and AC: Valhalla With Native 4K Only on PC

Crytek's Crysis Next Leaks Into the Web