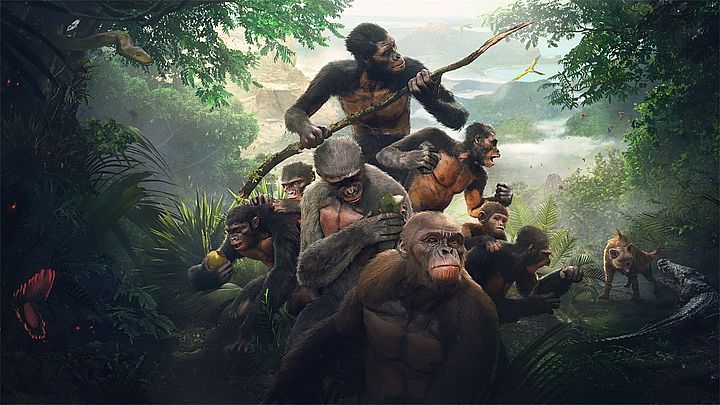 The Soprano family from centuries ago.

Ever heard of Ancestors: The Humankind Odyssey? If so, you probably remember that Panache Digital Games, led by Patrice Desilets (one of the creators of the first installments of the Assassin's Creed series), is responsible for this project. And also the fact that the game, despite high expectations, did not fully meet the expectations of players and reviewers. Ancestors appeared on PC (as an exclusive Epic Games Store title) on August 27, this year. Since then, Metacritic has recorded 70 game reviews with an average score of 64 points, which is not a very impressive result.

Since the game will also hit Xbox One and PlayStation 4 on December 6, GamesIndustry.biz decided to quote Desilets' comments from this year's Reboot Develop Red conference, held on Halloween in Canada. As you can easily guess, the dev was not very happy with the reception of his work:

"I'm used to having bigger numbers than that, so it's the elephant in the room."

He also added that the players expected simply too much from a game of a studio, in which only 35 people strong. Due to personnel shortages, the creators had to take radical steps to be able to release the game at all:

"People expected my studio of 35 people to ship a game that is really close to Assassin's Creed, and it's just not possible. We made some harsh decisions in order to ship the game, and we wanted it to be different."

The problem of deadlines nothing new in the video game industry. Many times, the devs complained that they did not have enough time to work polish the before the launch. This usually ends with the release of a few (dozen) updates, after which the game becomes playable. The best example of this is No Man's Sky, developed by Hello Games. The creators of the game went through a lot to set the game on the right path. In the end, it was so successful that the fans officially thanked the devs. In this case, however, humility and a confession of guilt by the developers helped. The situation is slightly different with Patrice Desilets, who reacted poorly to criticism and got defensive:

"We know for a fact that some reviewers actually didn't play the game. It is part of our industry -- they have to review games, and they have 15 of them to review in one week, and sometimes they don't have time. And since Ancestors is so different, some of them went 'urgh, I don't have time for this.' [...] And we know for a fact that some just invented some elements in the game -- like there is no fire and you cannot ride any horses, even though one reviewer said 'oh, it wasn't that great when you ride a horse.' Yes. My people are pissed, by the way."

The dev, apart from colourful examples of how badly he was treated by reviewers, also noticed that making a game about human evolution is a very difficult task in itself. It is worth noting that this is a new direction not only for Desilets, but for the whole industry in general. As a boss and a dev at the same time, Desilets had to face dilemmas about the final look of the game. As he stresses himself, the decisions were not easy:

"The game designer in me wants to make a decision about the quality and whatnot, and then the other guy says, 'no, no, I'm responsible for those people, and I need to make a decision that makes sure the studio doesn't shut down, and that it's good for at least two other years afterwards."

Of course, from the perspective of time we can say that maybe it was worthwhile to focus a little more on the quality of the game. GamesIndustry.biz informs that during the development of the game the studio was gradually growing, although not in full-time employees. However, there have never been more than a few dozen of them. And that's why Ancestors has never become what players, reviewers and creators could have expected:

As for the console edition, Desilets assured that the game will receive the necessary tutorial, which the creators did not have time to implement in the PC version before the launch. The head of Panache also added that after many years of fighting for 1666: Amsterdam, he secured the right to it and intends to do something about it. He described it in the following words:

Well, let's hope that in this case time and high expectations of the players will not stand in the way of creating a decent production. And what exactly will 1666: Amsterdam be? You can read a little bit about this mysterious project here. Of course we wish the devs good luck, because we definitely prefer good games to poor... I mean, underestimated ones.