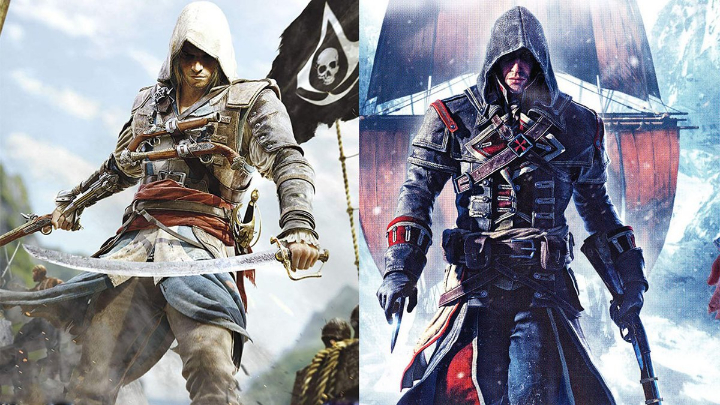 We will play as the pirate Edward Kenway and Assassin hunter Shay Cormac on Switch.

Recently we reported that one of the Greek stores offered Assassin's Creed IV: Black Flag and Assassin's Creed: Rogue on Switch. The rumor turned out to be true, which was confirmed during the latest Nintendo Direct. Both games and all their expansions will be featured on the popular mobile console as Assassin's Creed: The Rebel Collection. Its premiere is scheduled for December 6, this year. The compilation will be accompanied by a number of improvements prepared especially for the Switch. So you can count on mobile fun, touch screen interface, optimized HUD, HD Rumble, and controller movement aiming.

The fourth installment of the series is widely regarded as one of the best, partly because it does not focus only on the fight between the Assassins and the Templars. In Black Flag we play the role of Edward Kenway, who from an ordinary thug turns into a famous pirate captain and member of the Assassin Brotherhood. Developers could not have chosen a better place and time to show his conquests. In production we visit the Caribbean (including such famous ports as Havana and Nassau) during the so-called golden age of piracy. We even have the pleasure to meet the real cream of captains, including Blackbeard, Calico Jack and Anne Bonny.

Rogue allows us to take a closer look at the 18th century Seven Years' War, which we see from the perspective of Shay Patric Cormac. The protagonist is a former member of the Assassin Brotherhood, who disagreed with the doctrines of the order and decided to leave it. Interestingly, he switched sides of the conflict and joined the Templars. Since then, his task has been to hunt down his former comrades. The game employs mainly the solutions used in Black Flag, so sea voyages and numerous skirmishes with the use of ships are common. This time you can sail across the Atlantic Ocean, and among the available ports we have New York. Although the potential was high, Rogue did not repeat the success of AC4.

The game originally debuted on Xbox 360 and PS3 in 2014, a year later it was also released on the PC. The remastered version is available on PS4 and Xbox One from 2019 and features 1080p and 4K resolution and improved textures.