There are interesting rumors on the net about the next installment of the BioShock series. They claim that the game will be titled BioShock 4: Isolation (name may still change) and will be announced in the first quarter of next year. The alleged logo and a poor quality slide from an internal presentation were also leaked. There was also a variety of information about the project. The source is not verified, so these reports should be approached with great caution, but nevertheless they are worth your interest, because they sound quite intriguing.

It has long been known that the game will be set in a new dystopian city. However, the latest rumors bring some interesting information. According to them, the place of action will be divided into two levels. On the surface there is a rich metropolis, ruled by a brilliant entrepreneur. Whereas poorer, underground districts are ruled by a dictator. Between them there is to be a border zone, which will be the field of a war between both factions. 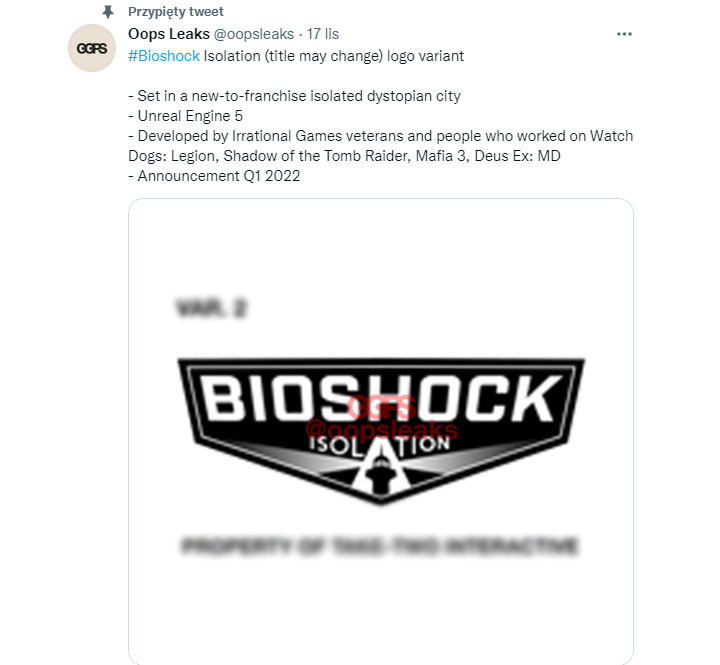 The project is being developed on Unreal Engine 5, and veterans of such games as Watch Dogs: Legion, Shadow of the Tomb Raider, Mafia III or Deus Ex: Mankind Divided are taking part in the works. BioShock 4: Isolation is supposed to be an open-world game and side missions, but constructed in such a way that frequent returns to previously visited locations are not necessary. The city will be inhabited by several competing factions, whose relations with each other and us will change during the game. These reports coincide with the earlier information deduced from the announcements.

Publisher of BioShock 4, Take-Two Interactive, is said to be concerned about the pace of progress. The team Cloud Chamber that works on the project has recently been bolstered with Mafia III devs Hangar 13, after the project Volt was scrapped.

The game was announced in late 2019. The new BioShock is worked on by many veterans of the series, but the father of the franchise - Ken Levine - is not among them. He is currently busy creating a new IP at Ghost Story Games.

10 km of Highway Built in Minecraft Across 5 Years

Battlefield 2042 Was to Have Much Better Environmental Destruction