Broken Lines is the work of a small Danish team at PortaPlay and is published by Super.com. Originally the title was supposed to come out last year, but - as it happens with video games - the calendar does not always match the publishing plans. The latest, and quite possibly the final, release date on PC is February 25. The game is also supposed to be released on other hardware platforms (PS4, Xbox One, Nintendo Switch, and even tablets), but the exact date is unknown.

Broken Lines is a tactical RPG that was inspired by the warmly-received indie game Frozen Synapse: Prime. However, the creators wanted to introduce a more dynamic gameplay than in this title, which they decided to achieve by limiting micro-management.

In the game - slightly different from traditional tactical XCOM RPGs - we are not supposed to give separate commands for movement and attack. The main task will be to plan the action of our subordinate, and they, fully aware of his surroundings, will take independent actions in case of encountering an enemy. Both our soldiers and enemies are to move simultaneously. The game is also supposed to have an autopause function when the situation on the map changes (e.g. when our units notice new enemy units). The player's task will be to determine the strategy, plan the route and the way the characters move, and to choose special skills (each member of the squad will have unique abilities). Of course, you can never be sure that everything will go according to the plan, so an important part of the game is to react dynamically to changing conditions on the battlefield. 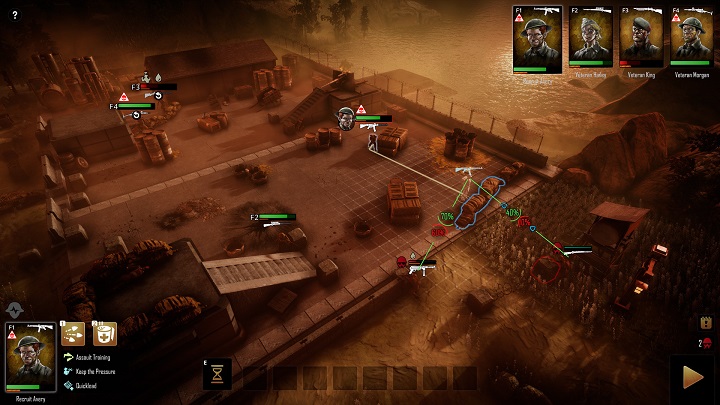 Tactical decisions are meant to matter - it's always better to have cover against gunfire than not.

In the game, our task will be to lead a troop of soldiers during the Second World War. Their plane crashed somewhere in Eastern Europe, behind enemy lines. The survivors will try to rejoin thei allies without being able to make contact with the command. The title is largely intended to focus on narrative. Each of the characters under our command is to have their own character, needs and opinions. Our decisions will determine what kind of people they will become and how their story will end. We're gonna buy a new weapon, or supplies? Decisions are meant to matter.

As in Darkest Dungeon, the heroes are supposed to have a morale indicator, whose negligence can lead to unforeseen consequences, and in the worst case, to desertion or death of our subordinate. 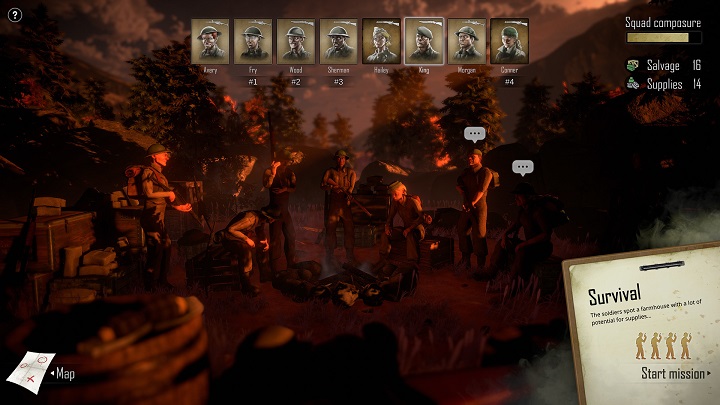 This is the full lineup of our team, but whether everyone will survive to the end is up to us.

The described mechanics do not exhaust what the creators have in mind. However, they give some idea of what the game is supposed to look like. Given the lazy start of the year, PortaPlay's production may turn out to be an interesting way to spend time in anticipation of bigger titles - provided it is done decently. Broken Lines is not the first game from the studio to hit PC - their earlier game, the tactical RPG Tales from the Void, never gained bigger publicity. It seems that this time the story will turn out differently.