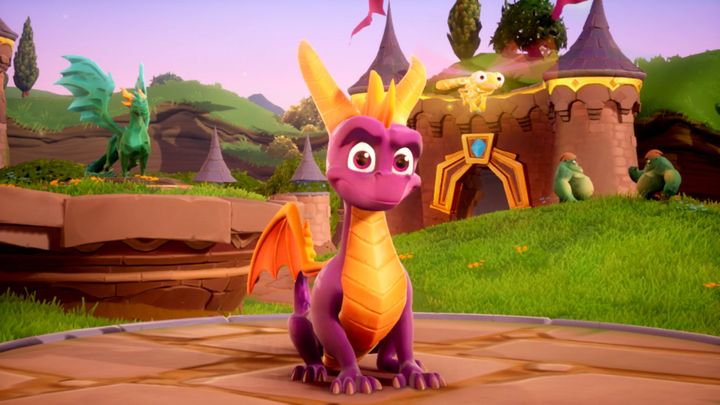 Spyro Reignited Trilogy is one of the games available in this edition of Humble Monthly.

Humble Monthly is a subscription-based service that offers clients a set of game keys for various digital distribution platforms for a price of $12. What distinguishes this service is the fact that only some of the titles included in the set are presented at the beginning of the sale - a complete list is made available only after the end of the sale. Today another edition of the offer has started. At the same time it was announced that it will include three productions - Call of Duty: WWII, Crash Bandicoot N. Sane Trilogy and Spyro Reignited Trilogy.

Spyro Reignited Trilogy is a pack of three refreshed 3D platform games from PS1 era. The main protagonist of all the productions is Spyro - a small purple dragon who often saves his friends from trouble. The title debuted on November 13, 2018 on PlayStation 4 and Xbox One. Less than a year later it was also made available on PC and Nintendo Switch. The game met with a warm reception - the average rating of the PS4 version on Metacritic is 82%.

Call of Duty: WWII is an installment of the popular FPS series. The title is a return to the roots of the series and takes us back to the times of World War II, where we take part in the battles after the Allied landing in Normandy. The title debuted on November 3, 2017 on PC, PlayStation 4 and Xbox One. The game was received positively - the average rating of the PS4 version on Metacritic is 79%.

Crash Bandicoot N. Sane Trilogy is a refreshed set of three platform games from PS1 era. They tell the story of the eponymous bandicoot (a kind of marsupial) who faces the evil Dr. Cortex. The game have been thoroughly refurbished, not only in terms of graphics, but also technical aspects. The title was released on June 30, 2017 on PlayStation 4, and a year later it came to PC, Xbox One and Nintendo Switch. The game was warmly welcomed - the average rating of the PS4 version on Metacritic is 80%, and our reviewer awarded it 8 out of 10 points.

With the start of the sale of this edition of the pack, a complete list of titles from the previous month was also announced:

It is worth noting that apart from the aforementioned set of game, Humble Monthly subscribers also get other benefits - 20% discount on shopping on Humble Store and access to Humble Trove, a database of dozens of games that can be downloaded directly from the site. Please also note that all titles purchased under the subscription do not disappear when the subscription expires.