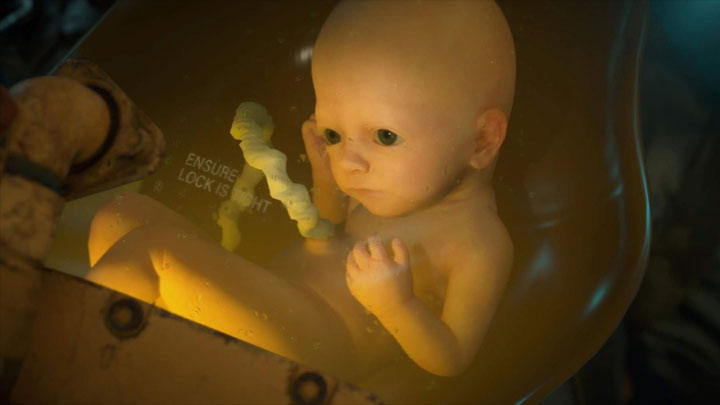 Death Stranding will launch in November.
DEATH STRANDING IN A NUTSHELL:

Death Stranding, the new game from Hideo Kojima, promises to be one of the most unusual launches of the year. The latest proof of this is the disclosure of the method of communication with BB (Bridge Baby), the child that the game's protagonist will carry with him.

Hideo Kojima boasted on Twitter that in Death Stranding the players can enable the child to "talk" to the player through the DualShock speaker. It is worth mentioning that the plans are for a limited edition of PlayStation 4, which will be accompanied by a special gamepad with a casing similar to the container in which the main character of Death Stranding is to wear the baby.

Recall that in the game, BB children are taken from the bodies of mothers in a state of clinical death. After being placed in artificial uteruses, babies enable Bridges agents to see the world of the dead.

Death Stranding is coming exclusively for PlayStation 4. The game will be released on November 8, this year. A few days ago, the devs boasted that the game had gone gold. This means that the work on it has been completed and the title has been sent to the press. Therefore, we do not have to fear that the launch will be delayed.

It is worth mentioning that the last few weeks have been fruitful for the fans of Death Stranding. We found out that the real fun in the game will start in the middle of the campaign. On the other hand, the TGS fair featured a trailer introducing the game's story and a few dozen minutes of gameplay.