It takes time to get a business off the ground - as Mike Wilson, Harry Miller, Rick Stults, Nigel Lowrie and Graeme Struthers, who founded Devolver Digital in 2009 in Austin, Texas, know all too well. The videogame publishing company started out small, but the growing number of titles it distributed over the years has resulted in Devolver Digital announcing its IPO today.

The publishers of such productions as Fall Guys, Loop Hero, Enter the Gungeon, My Friend Pedro, Carrion, Serious Sam 4, Gris, Shadow Warrior 2 or OlliOlli2: Welcome to Olliwood (the full list of which can be found here) believe that the move will not change much in the day-to-day operations of their company, but at the same time will give them the opportunity to collaborate on games that were not even considered before. The official announcement emphasizes that the insiders - the same people who attended the first board meeting held at the picnic table - remain the majority owners of the company; only the size of the table at which they sit has increased. 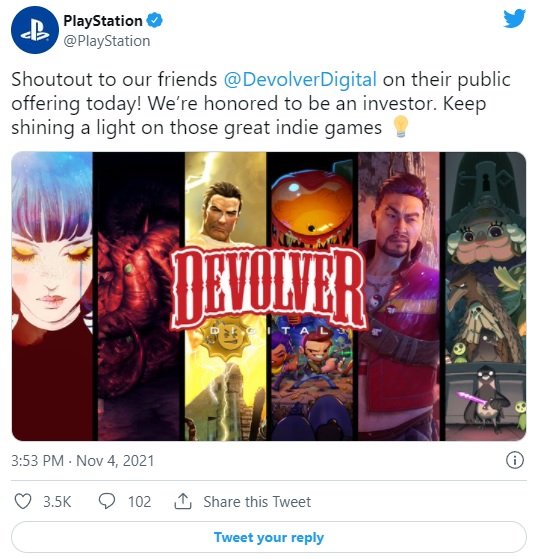 The first vacant investor seat was taken by none other than Sony. The company's management informed via Twitter that they are "honored to be one of the investors". Sony's representatives emphasized that Devolver Digital is doing a great job popularizing indie games.

One of them - the one which a lot of people are waiting for - is undoubtedly the as yet unannounced Enter the Gungeon 2. The publisher, however, reported that despite trying, they were unable to get any information from the devs at Dodge Roll, who were responsible for the game's first game and the potential sequel.

Rivers and Lakes on New Screenshots From ETS2 Heart of Russia