Popularity in the gaming industry can be a fleeting thing. Sometimes, a title becomes so popular that it rides the wave to the top and goes down in history. Such a scenario came true in the case of Fall Guys: Ultimate Knockout - a humorous battle royale from Mediatonic and Devolver Digital, which launched on PC and PS4 on August 4, 2020. Sony console owners were already able to pick up the title as part of the PlayStation Plus subscription on launch day. And it is thanks to this that the developers can now boast that their masterpiece has found its way to Guinness World Records as the most downloaded game in Sony's subscription. 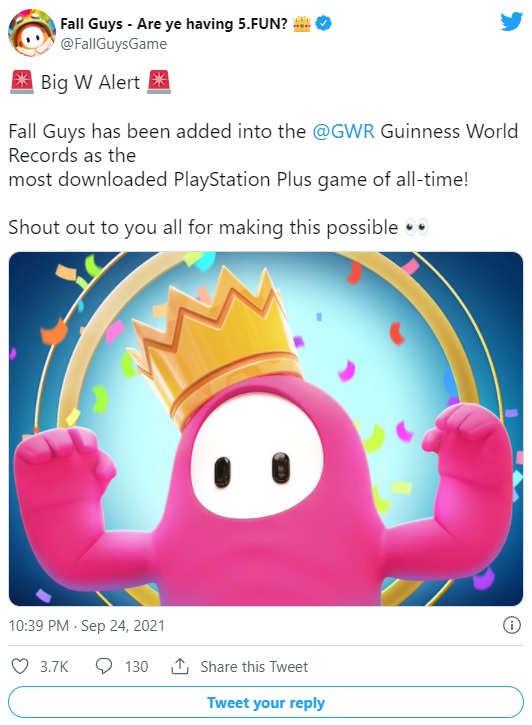 Last year we informed about the succeses of Fall Guys, exactly four weeks after the game's release. At the time, the publisher announced that the title was downloaded over 7 million times on Steam, and set a historic record for downloads as part of PS Plus. Although we did not learn specific data, a few days earlier Gamstat reported that the game had reached more than 8 million PlayStation 4 users. We can assume that the lion's share of this number was PS Plus subscribers.

Fall Guys' success was largely due to streamers broadcasting their gameplay on Twitch or YouTube - even such as TimTheTatman, who was unable to win a match for a very long time. As a result, the work of Mediatonic scored the best digital launch since Overwatch. However, as I mentioned at the beginning of this message, popularity in the game industry can be fleeting. Fall Guys' devs found this out when their title was dethroned by Among Us. But that didn't stop its growth - new content was added in the months that followed, including crossovers with iconic franchises like Doom, Sonic, Ratchet and Clank and... the aforementioned Among Us.

In December 2020 alone sales of Fall Guys on Steam exceeded 11 million copies. The success of Mediatonic's game caused the studio to be bought out by Epic Games. The next step for the devs was to prepare a version of this still quite popular game (during the last 24 hours on Steam it was played by about 23 thousand people) for XOne, XSX|S and Switch. It's supposed to happen later this year.

Screenshots From The Crew: Orlando Leaked; New Game Was to be a DLC for The Crew 2

Screenshots From The Crew: Orlando Leaked; New Game Was to be a DLC for The Crew 2