This week a closed-door presentation of gameplay footage from Elden Ring, agame developed by From Software, took place, during which the lucky audience could watch 17 minutes of actual gameplay. Although the gameplay was not revealed to the public, impressions of those who managed to see it began appearing on the internet. What's more, a representative of the company, Yasuhiro Kitao, was on site to answer questions from the participants. Here is a collection of the most interesting information we were able to gather about the game based on the published statements of journalists.

Story and world of Elden Ring

First, a few sentences about the story told in Elden Ringu. From Software has a habit of not revealing to the the players all the nuances and mysteries of the world.Rather than explaining the plot directly, the devs prefer to let the fans discover and interpret the events presented in the game on their own. It will be no different in their newest title. Uncertain information will be provided by enigmatic monologues of encountered characters and descriptions of items that we will find during the exploration. What's interesting, in the case of Elden Ring the devs put more emphasis on characters and their biographies than in previous titles.. It's supposed to give the impression that none of the faces we'll see during the adventure are in the world by accident. This solution is to enable players to get into the story more easily and increase immersion.

"We're often told that our games have stories that are difficult to understand, but this time we feel that, rather than focusing on just the world itself, the characters and the drama surrounding them will paint a clearer picture of the mainline story and help players become more immersed in the story than ever before," explains Yasuhiro Kitao. 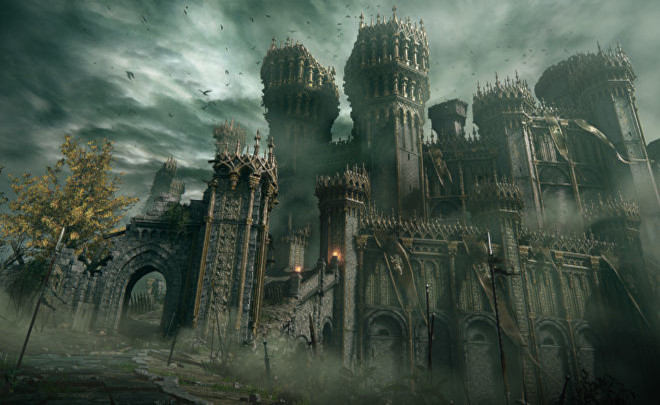 Next, it's worth mentioning the world. Although huge, it was not developed for its sheer size and is filled to the brim with content. Every smallest detail has been handcrafted rather than randomly generated - from little plot tidbits to hidden bosses. Additionally, the world will feel full and connected into a cohesive whole. Outer areas, cities, vaults, and dungeons will all form one large and undivided map. We will be able to discover everything by just exploring, just like in The Legend of Zelda: Breath of the Wild. Truth be told, this comparison is not accidental, and people sharing their impressions from the Elden Ring show often put these games side-by-side. Some even call From Software's new title their own BotW interpretation.

"The Land Between is truly dense with dangers and secrets, and our aim is for the player to make these discoveries and have these chance encounters just through the act of exploring," continues Kitao.

The title will feature so-called Legacy Dungeons, which, despite their optional character, will be a test of skills for the players. However, these are not just usual locations, in which we'll face stronger versions of the same opponents as in the main path. These will be fully unique places, differing from each other in appearance, atmosphere, and the creatures that stand in our way. At the end of the challenge, we will be rewarded lavishly not only with items but also feeling of satisfaction.

Elden Ring introduces many new elements to the formula used by From Software. Among others, these are new mechanics. The first of these will be summoning the souls of the fallen to help us in battle. And no, it's not about summoning support by means of a sign left on the ground by another player or an NPC. We're talking about familiars, which will be created using a special item or magic. What's more, these particular tricks will not be available during multiplayer games. Souls will differ from each other in skills, stats, and their basic fighting style - from tough crushers with huge axes, through agile rogues, to the ranged wizards and archers.

As we saw in the last trailer, the protagonist will be able to summon a mount. Having it will not only speed up the movement but our steed can also be used to help in combat.. Sometimes we'll even have to sit in the saddle to deal with some more difficult opponents, including bosses. 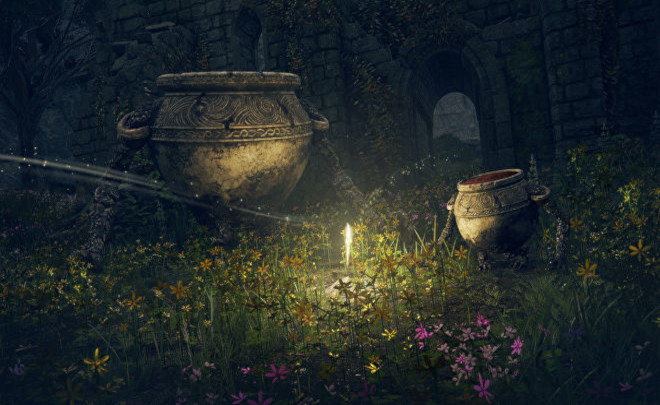 This is how Sites of Lost Grace will look like

The iconic bonfires will also change. These will now be called Sites of Lost Grace and, like in previous installments, will be scattered throughout the world. Due to the vastness of the lands, some of the resting places will have a homing becon in the form of a discreet streak of light. Apart from that, most "bonfire" mechanics will be the same as in the previous games from the genre launched by From Software. The only gameplay novelty is the possibility of choosing a set of moves for our equipment. Instead of attacks assigned to a specific weapon, in Elden Ring we will be able to choose a fighting style for the weapon we use.. These, in turn, we'll freely exchange, resting at the Sites of Lost Grace. "Fires" will also allow for free teleportation between all (except those located in special locations and Legacy Dungeons) available points of this kind.

The role of the guardians of fire from Dark Souls is taken over by Melina - a mysterious woman in a cloak with a symbol of a dragon wing in her eye. She will enable us to improve our character in the same way as it was done in the second and third installments of the series.

Will Elden Ring be a game for everyone?

Kitao mentions that while the title will not offer a choice of difficulty level, it will be much more accessible to a new player than Sekiro. The freedom of movement through the world associated, as we mentioned, with The Legend of Zelda: Breath of the Wild will enable us to adjust the challenge level to the player. If we do not feel up to it, we'll direct our steps to less demanding locations. However, when we feel the need to test our skills, we'll go to dangerous areas, where death lurks around every corner. Elden Ring will not be a linear game, in which we have to perform specific actions to progress the plot - we will be the ones choosing the destination of the journey.

The developers also want to include in their title the most balanced ways to play the game. We won't find a dedicated, strongest "build" or the best character class. Each of them will have its advantages and disadvantages and a particular direction of development. Increasing statistics will enable us to improve our particular style of play. Regardless of whether we'll fight exclusively with heavy weapons, eliminate enemies with a bow, or create spells - everything should work equally well. If From Software will have things its way and really develop the game as it describes, then we're in for quite an adventure with complete freedom and plenty of opportunities for character progression.

This was the most important information about Elden Ringu, which were among the impressions of the participants of the closed-door show of the game. If you're curious about all the details, even the smallest ones, I refer you to the comprehensive reports published, for example here or here. You can find there, among other things, descriptions of battles with some of the bosses and the combat system.

„Breakthrough Technology” From Ratchet & Clank on PS5 Could Work on PS3

Cheats Can Disconnect You From a CS:GO Server

Blizzard to Rename McCree in the Wake of Recent Scandal

Warhammer 40K: Dartkide - Complete Weapons List and How to Unlock