If you've been good (although even naughty gamers can also take part), FromSoftware's Santa Claus has good news for you. On the official account of Elden Ring on Twitter, a message appeared about an upcoming update to the popular soulslike game.

According to the information published in the post, Colosseum will be available for download tomorrow, i.e. on December 7, for free. This is a surprising decision, given that for a good few months there had been speculation about the content of the paid add-on, which could be the just announced Colosseum (mentions of them were found in the game files).

The brief info was accompanied by an equally modest trailer showing the said update.

As the name suggests, the update will introduce arenas to the basic game, where the players will be able to engage in one-on-one duels and team competition, during which they will invite up to two friends to join them. The coliseums will be located in Limgrave, Leyndell and Caelid (via GamesRadar).

Interestingly, according to industry journalist Jason Schreier, with the introduction of PvP mode FromSoftware may be preparing the ground for the announcement of DLC for Elden Ring During The Game Awards. 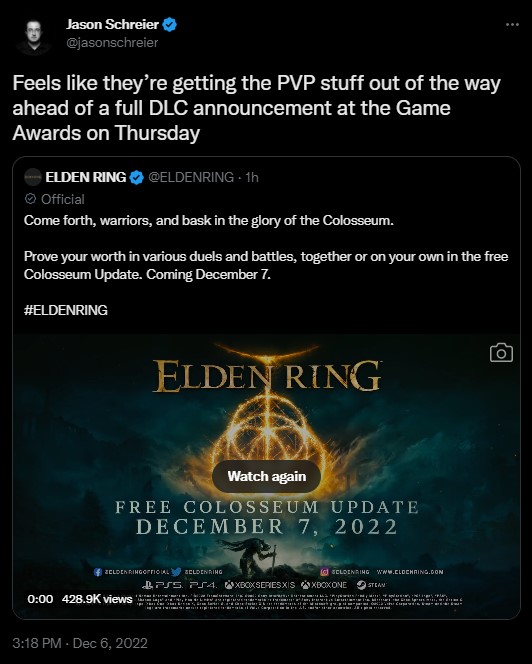 And while we're at TGA, on December 9 we will find out how many awards will be won by Elden Ring in this year's edition of the gaming industry's most prestigious awards. Recall that the game has been nominated in the best game of the year category, among others. The ceremony will begin at 4:30 om PT.