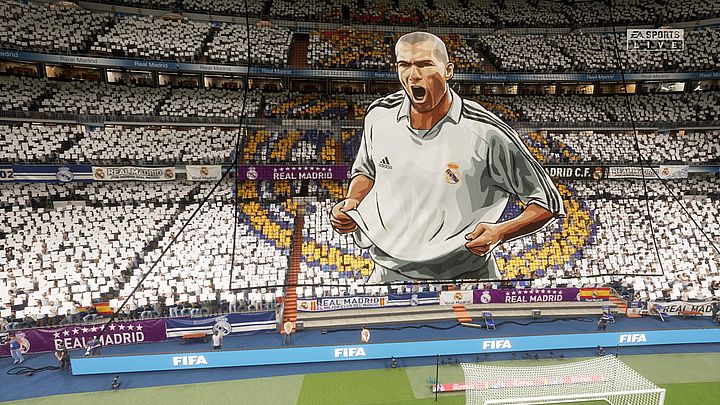 Zizou as a background for a match - looks great.
NOVELTIES IN A NUTSHELL:

More FIFA 20 novelties. A few days ago we learned about changes that should have a strong impact on Virtual Clubs. Even earlier a new gameplay footage of the game was released, presenting changes in mechanics. Finally, after revealing most of the cards and presenting the players who will be on the covers of< different game editions (including Ultimate), EA Sports decided that the time had come for some solid facts about the most popular game mode - the newest incarnation of FIFA Ultimate Team.

A lot of bad things can be said about FUT, but definitely no one will take away its huge interest among both hardcore and casual players. Despite numerous scandals that were directly related to the monetization system within the mode, millions of players around the world are still having a great time and contributing to EA's profits. In recent years it is difficult to talk about a revolution in FUT. EA Sports has been trying to make this mode as good as possible (although some might say that it is to make it possible to spend even more money in the game - not without truth). Then what changes will FIFA 20 make?

The first and definitely one of the biggest innovations in FUT 20 will be the introduction of season objectives to be part of a redefined system of challenges. The first season will start on September 19 (i.e. over a week before the official release of the game) to allow players who have purchased EA Access to access the new mechanics. In FUT 20 the objectives will be grouped according to themes and tasks. Individual achievements will provide experience points and awards and help to complete group challenges. Season objectives will be divided into 4 categories:

There will also be goals and challenges related to mastering FUT, as well as the so-called "Milestone Objectives", which are awards for achieving key moments in the game. All goals will be rewarded with player kits, specific players or graphic elements to personalize the club. This is to made to satisfy both pros and casuals.

There's also something for fans of aesthetics. We all know very well that for many players the element of distinction in competitions is very important. EA Sports ensures that this year's edition of FUT will improve this aspect of the gameplay. In this mode you will see 8 options to personalize your club. It's gonna be this:

The devs mention popular kits that were created by artists. We do not know, however, whether these will appear in the latest installment (hopefully so). It is also interesting to set a default Cieszyn which can be activated with just one button. This does not mean, however, that others will be blocked. We will simply have to perform the appropriate sequence on the gamepad to do them.

EA Sports follows through. After House Rules was introduced to the Virtual Clubs, it was time for FUT. It's a big deal, though. The EA team has prepared a special FUT Friendlies menu, where you and your friends (locally or online) can take part in a classic 11 on 11 game or play with custom options. Friendly games will not count towards the club record, nor will they cause injury or loss of a player due to cards. Probably this mode will soon turn into one big testing ground. And now, the greatest curiosity. We'll be playing social games not only in the modes known from House Rules, but also in four completely new ones. They will be:

Line-up building and other options

The creators have made every effort to make it even easier to navigate the menu of line-up building. Now it will be much easier to place a player in the line-up and manage the cards (using the circle menu). There will be no shortage of new Legends either. We currently know the names of six players (Zidane, Drogba, Pirlo, Koeman, Wright, Carlos Alberto), but there will be more. The Squad Battles interface will also be refreshed. There will also be a few cosmetic changes related to the lighting at the stadium. And that's it - all the changes and their detailed description can be found at this address.

As you can see, there will be a lot of changes. Most of them have a good chance of mixing up the game. From the point of view of hardcore players, the most important changes will be season objectives and team personalisation. On the other hand, friendly games can serve as a great training, and the possibility of introducing own rules will diversify the gameplay. We have a really interesting FUT season ahead of us. Let's hope that the changes will be for the better and the lootboxes won't be able to control the more game segments.

FIFA 20 will go to stores on September 27 this year. The title will be released on PC, Xbox One, PlayStation 4 and Nintendo Switch.