More than two years after the first announcement, numerous delays and the renaming from Project Athia to Forspoken, creators of Final Fantasy XV can celebrate the debut of their new work. It's the first AAA game this year and a big opportunity for Luminous Productions.

Forspoken - save the land of Athia from a raging plague

The game is now available for purchase on the PlayStation 5 console (PS Store) , and the PC version (Steam and Epic) will be available at 9:00 am PT. Regardless of the platform chosen, we will pay $69.99 for the basic version or $94.99 for the Deluxe edition. Both editions give access to Forspoken, and the Deluxe version enriches the experience with a bundle of extras: a soundtrack (available outside of the game), a mini-artwork, the In Tanta We Trust Prequel DLC (early access) and the Rare Resource Kit. The PS5 title also offers a demo version (you'll have to wait for it on PC), as well as the option to buy Deluxe content for the basic edition. 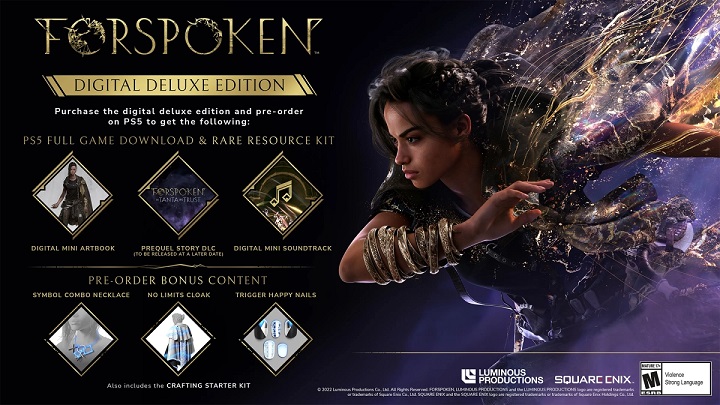 The Deluxe Edition is not only the game and early access to the In Tanta We Trust DLC, but also a ton of new content. Source: Luminous Productions.

Forspoken is a TPP adventure action game. The setting is the fantastic land of Athia, declining due to a dreadful plague called The Break, which turns the inhabitants of the picturesque land into bloodthirsty monsters. Salvation from the mysterious plague turns out to be a young woman, Alfre "Frey" Holland, mysteriously brought in from modern-day New York. Thanks to a bracelet with magical powers and an innate immunity to the deadly disease, the heroine must save the land of Athie and return home.

The first reviews has already started appearing across the web. The average rating on Metacritic is 68% (based on 63 reviews of the PS5 version). Before the release we received a not very encouraging demo and a preview of high system requirements.

In Tanta We Trust DLC preview

The developers have also presented the first short clip from the In Tanta We Trust DLC (the relevant footage starts at 1:04:16).

For the moment not much information about the DLC are is available. What is known is that the DLC will tell stories from before the events of the original game and that it is an integral part of the Deluxe Edition (along with early access). The expansion's release is scheduled for the holiday season, this year.

Hogwarts Legacy Not Working, Downloading or Unpacking? Here's a Solution

AI Won't Make a Better GTA 6, Take-Two CEO is Sure of That

Sherlock Holmes: The Awakened With New Gameplay and Demo

Is There a Console Port of Crab Game? Learn All About It

BF 2042 Already has Classes, but EA DICE Won't Stop There