After The Game Awards 2020 - as well as most of this year's gaming events - took place online, fans of digital entertainment might have feared that the situation would repeat itself. But it looks like plans are different; gaming journalist and presenter Geoff Keighley tweeted an announcement about this year's ceremony. It will take place in exactly ten weeks' time, on Thursday, December 9, as a live event at the Microsoft Theater in Los Angeles. 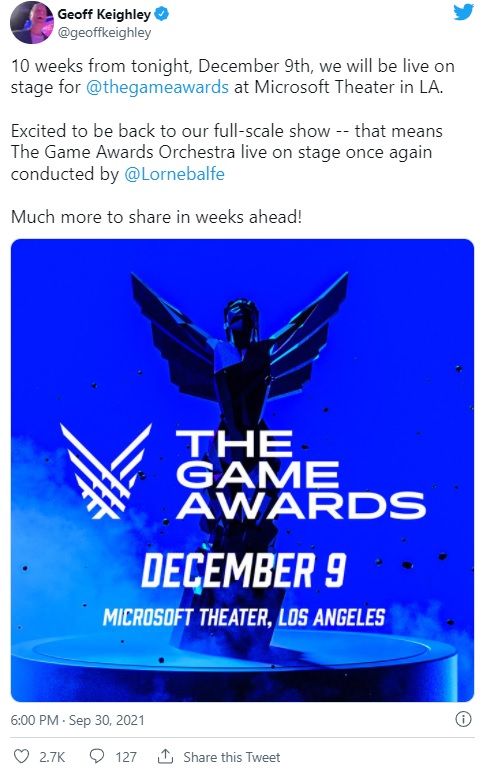 What can we expect? There will be no shortage of awards and presentations of upcoming titles. Last year, The Last of Us 2 and Hades received the most nominations, but it was Naughty Dog's controversial game that won the most important statuette. Some of the titles presented at the ceremony have already been released (Humankind, Returnal, It Takes Two, Nier Replicant and Road 96), others are due out in the near future (Back 4 Blood), and some went off the radar for the entire year (e.g. Mass Effect and Dragon Age). It's possible that we'll get new information about these games at The Game Awards 2021.

Last year's event saw 83 million streams worldwide, an 84% increase on 2019. In ten weeks, we can expect at least 40 free streams - including in Ultra HD - which will take place on Twitch, YouTube and other popular platforms and social networks. Nominations for this year's gala, as well as additional details related to it, are to be announced "soon". I don't know about y'all, but Geoff Keighley can't wait to begin:

"We are very excited to return to the Microsoft Theater for a special night to celebrate the past, present, and future of video games. Our goal is to bring the entire community together to celebrate the most powerful form of entertainment in the world [...]"