Creators of World of Warcraft had no luck in recent months. Not only is the development team constantly struggling with the consequences of Activision Blizzard's problems, but also every now and then players find other reasons to complain. Another one turned out to be the addition of a new cosmetic item in WoW's store, which annoyed fans of Azeroth.

The Stargazer set was unveiled yesterday in a special trailer, and it quickly became clear that the footage did not spark enthusiasm in the community. If users on Reddit are to be believed, at one point the video had 86 likes with over 2.8 thousand dislikes. Also, comments on YouTube clearly show the frustration of players.

The fans' discontent is by no means due to the contents of the Stargazer's Pack. The Celestial Observer's Ensemble looks very good, as does the space mount and pet. The problem is that the splendor of this outfit contrasts with the level sets that will return to World of Warcraft in patch 9.2 after a long absence.

With the debut of the update titled Eternity's End (currently available on the Public Test Server) players will be able to earn new armor, available for each class in several variants. These will be obtained not only for participating in raids (like before), but also from the Great Vault and within the Forge of Creation system. We found out what these sets will look like thanks to dataminers (via WoW Head).

Of course, it will take some time to complete a whole set, but the new armor should be worth the effort. Unless they'd be completely outclassed by, let's say... an armor available in the game's store. The comparison with the tiered mage outfit is particularly bad - so much so that there have been suspicions that the variant of the Celestial Observer's robe for this class is actually the original design of the leveled mage set. 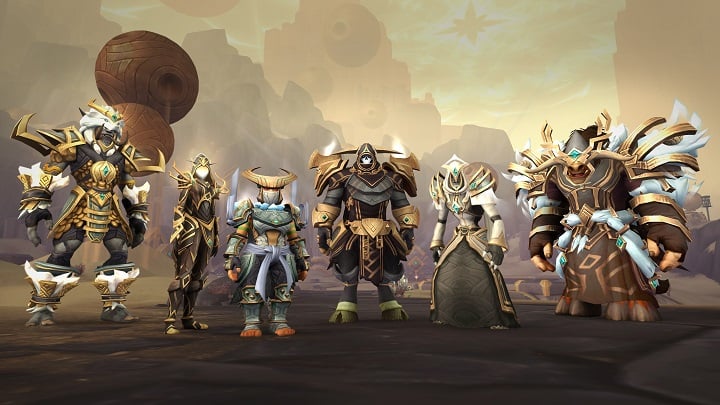 Even the best of the new level sets pale in comparison to Stargazer's pack.

The disappointment of players is easy to understand. They have long been demanding the return of the leveled sets. Meanwhile, these seemingly prestigious and difficult to obtain armors clearly stand apart from the outfits that can be obtained immediately, but for a modest fee. To make matters worse, according to fans, Blizzard chose a terrible timing by announcing the sets and the Stargazer's pack at exactly the same time. As a result, players' excitement about the former did not last long.