The Outer Worlds, the new game of Obsidian Entertainment, which will debut on October 25, received its "five minutes" during Microsoft's conference at the E3 fair. Besides, Leonard Boyarsky, who together with Tim Cain (the duo to which we owe the first Fallout) is in charge of this project, gave an interview to IGN and talked about the most important elements of the production; we have known about many of them for a long time, but Boyarski added a handful of details. At the same time, a new, extensive gameplay was presented.

Let's start with the fact that, according to Boyarsky, The Outer Worlds is in many ways the spiritual successor to Fallout: New Vegas". As he says, there is nothing strange about it, because both productions that are the fruit of his cooperation with Cain will have points in common. Although the game will not give us an open world, during the game we will visit a number of different locations - apart from planets we will find here, among others, asteroid surfaces or space stations. Considering their total surface area, the developer argues that the game world will be the largest of all that the Obsidian Entertainment team has ever created. Another thing is that although Boyarsky has not yet revealed the development plans for The Outer Worlds, the construction of this title opens the way for devs to prepare add-ons.

Before we start playing the game we will create our character, although the possibilities offered by the devs of the creator are still a mystery. We know, however, that during the game we will develop the protagonist in the direction we want - nothing will stand in the way of becoming an "idiot in space" who will have nothing particularly wise to say (which in turn will be reflected in the available dialogue options), a true hero or a villain who will kill anyone who stands in their way. It is worth mentioning that in The Outer Worlds it will be possible to eliminate almost every NPC. Almost, because as Boyarsky betrayed, in the case of one character, crucial to the plot, it will be impossible. 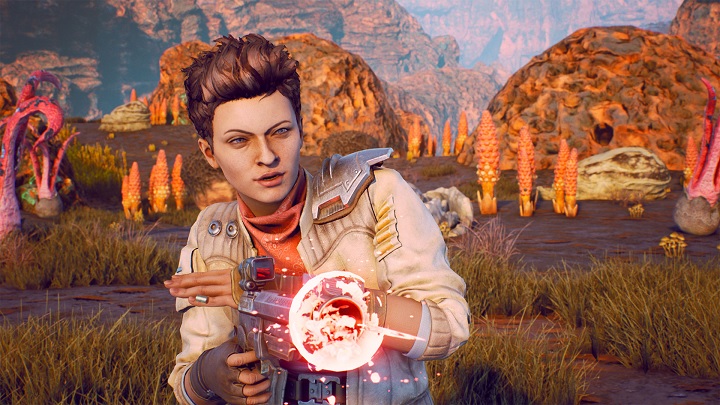 Our companions will comment on our decisions on an ongoing basis.

As for the places waiting to be visited, we will travel only on foot, as there will be no vehicles in the game. A certan vehicle will enable us to travel through space (or rather "jump" between locations) but it is to fulfil the role of our "mobile home". How much time we spend in a given territory will depend on how much we go into the details of the location. While there's nothing to stop you from rushing ahead, sometimes it'll be worth taking a break to learn more about the universe or discover some secrets.