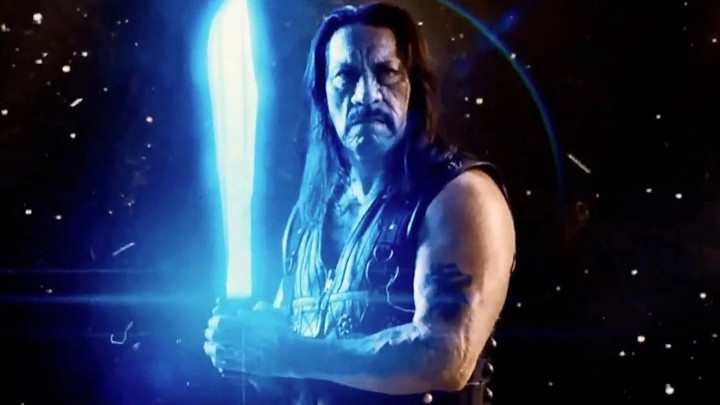 Machete don't text or tweet. ...but has a Nintendo Switch.

Screenwriter Gary Whitta (Rogue One: A Star Wars Story, After Earth) has recently been hosting the Animal Talking show on the Internet. Since he cannot meet his guests in person (due to the on-going pandemic), he contacts them online through Animal Crossing: New Horizons, accepting them in a virtual house stylized as a TV studio. The guests of the last episode of Animal Talking were Danny Trejo (who, by the way, celebrates his 76th birthday today), Elijah Wood and Greg Grunberg.

When Star Wars was discussed during the program, the actor, known for his role of Machete Cortez, revealed that he would like to play in The Mandalorian. Gary Whitta promised to contact Dave Filonim of Lucasfilm and try to get Danny Trejo involved in future seasons of The Mandalorian, adding a joke that the actor could play "The Mexalorian".

Interestingly, the third part of Machete Machete Kills Again... In Space, in which Trejo was to play the main role, was to be set in space. In a parody trailer included in Machete Kills film, there is even a motif of a lightsaber battle. Robert Rodriguez's new work went off the radar, however. Maybe The Mandalorian act will work out?

Star Wars: The Mandalorian debuted on November 12, 2019. The second season of the series is due to appear in October, while the third season, according to recent reports, is currently in the pre-production phase.