Sony Interactive Entertainment bragged about its successes in the last fiscal year. During a recent presentation SIE CEO Jim Ryan showed how much the PlayStation brand has grown - both in terms of financial results (including the increase in importance of monetization and F2P games), as well as its recognition and interest of buyers.

But what is perhaps most interesting, Sony presented sales figures for its games on PC.

By the end of March 2022, only Horizon: Zero Dawn had crossed the one million copies sold threshold - the final tally was 2.39 million copies. In the year and a half since its its debut (i.e. August 2020), the game has generated $60 million in revenue on PC.

Released on PC a year ago, Days Gone reached only 852 thousand units sold ($22.7 million in revenue). It's a decent result, although it compares poorly not only with the much older Horizon. Also Kratos surpassed the Bend's work. God of War was purchased 971 thousand times in less than two months since its release on PC.. The game generated revenue of 26.2 million dollars. 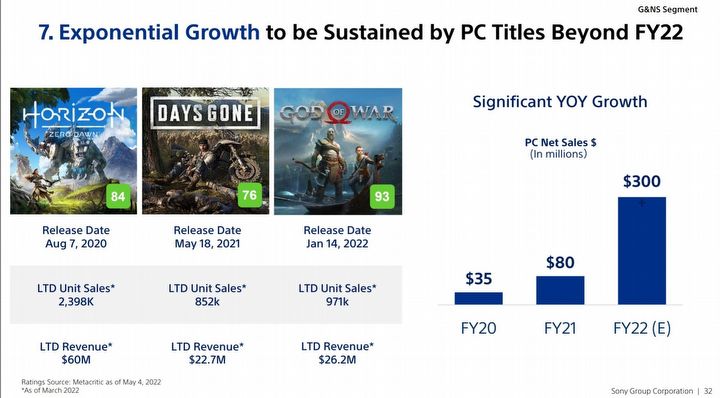 These results may seem modest for high-budget productions. At least until we realize that we are talking about ports of console games released many years ago on one of the most popular platforms of all time.. Even the latest Days Gone is already three years old, and the first Horizon celebrated its fifth anniversary of release on PlayStation 4 this year.

Against this backdrop, it's hardly surprising that Sony considers its debut on PC to be very successful. Therefore the company intends to continue investing in the PC market and anticipates increasing sales on this platform to $300 million. This would be almost a fourfold increase compared to the past fiscal year ($80 million).

Sony by no means intends to limit itself to PCs. The company is also moving to conquer mobile devices and the VR market, and PlayStation brands will be seen not only in video games.

My Time at Sandrock Romances and Characters

God Simulator WorldBox Just Got a Lot of New Features