It's become a tradition of sorts that the games to be made available in the coming months as part of the PS Plus subscription are first revealed through leaks, and only then does Sony make the appropriate announcement. It is no different with the offer for January 2022. Mydealz.de user by the handle billbil-kun - the same who provides us with advance information about the games given away for free on Epic Games Store - reported that next month subscribers will be able to add the following games to their accounts: Deep Rock Galactic, DiRT 5 and Persona 5 Strikers. 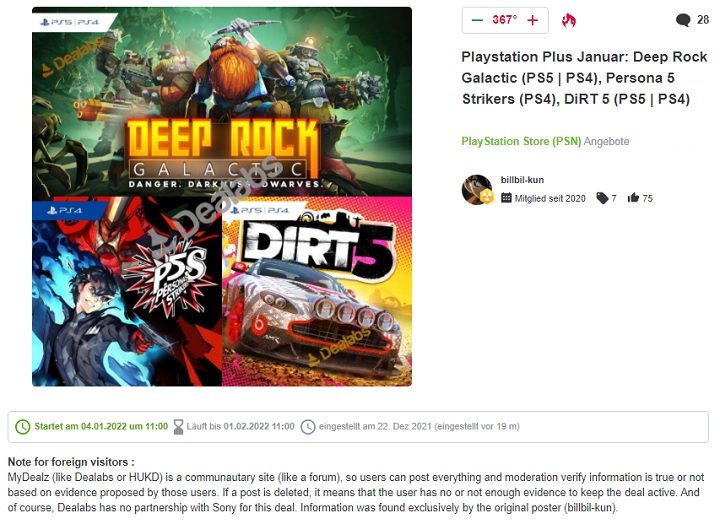 PS Plus offer for January 2022

As you can see on the attached image, the titles are to be available from January 4 to February 1. Before that, Sony will likely confirm this information. Until then, however, you should approach this report with caution, so as not to be disappointed later. It seems, however, that the owners of PlayStation consoles and PS Plus subscription can expect a good start to the year.

Mass Resurrection of 64,000 Characters in Icarus; Players Misunderstood a Mechanic

Ubisoft Won't Give Up NFTs: ‘It's a Major Change That Will Take Time’

Ubisoft Won't Give Up NFTs: ‘It's a Major Change That Will Take Time’

Mass Resurrection of 64,000 Characters in Icarus; Players Misunderstood a Mechanic

Steam Deck Will Launch 80% of Windows Games Thanks to Proton