We've had an outbreak of giant horses in Red Dead Redemption 2, which have been spooking players since the release of the production. Unfortunately, so far we haven't been able to sit on these "majestic" creatures. Fortunately, we can take comfort in other unusual mounts thanks to the Pig Rider mod, which, as the name suggests, enables us to sit on the giant hog. 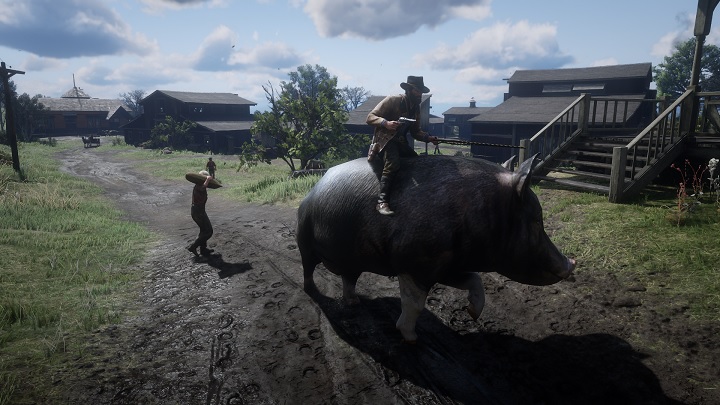 This is another work of modder known as JulioNIB, who created severl other projects for Rockstar's games. His latest modification is still unfinished and only those who support him on Patreon with a minimum of $20 a month can access it. Nevertheless, the author boasts materials presenting the Pig Rider. Apart from the title giant hog, the mod offers mounts like a bear and giant panthers and wolves. In the latest update, eagles and bats have also been added, allowing for a sky-high ride.

Red Dead Redemption 2 itself was unlikely to give rise to any complaints about mounts. In the game we have a choice of 19 horse breeds, reproduced - let's put it this way - in the smallest details. The lack of other types of animals to ride was not surprising given the emphasis on realism. But let's be honest - who among us wouldn't want to see Arthur Morgan riding a pig the size of a rhinoceros or majestically gliding on the back of an eagle? Perhaps in a while we will get this opportunity free of charge. The previous works of JulioNIB (for example the Iron man EndGame mod) were often made available for free after the completion of the works and this may be the case here as well.