The huge success of GTA Online gave reasons to hope for Red Dead Redemption II, Rockstar delivering a Westworld-like experience. The beta version of Red Dead Online - riddled with microtransactions and arduous grind for a fistful of dollars - is far from fulfilling these fantasies. Players are also not satisfied with the pace of change, and the last update of 26 February only added insult to injury.

The biggest patch so far introduces novelties in PvP modes, improvement in tackling griefing, new challenges, weapons and cosmetic elements. Unfortunately, none of these changes was welcomed by the Red Dead Online community, and the game's subreddit, which enjoys great popularity, is filled with people venting their frustration. In opinion of one player, the new update further encourages toxic behaviour by forcing players to kill each other in order to pass daily challenges. In addition, creators halved the price for selling hunted game to butchers (according to Rockstar, the previous prices were wrong in the first place), which reduced the virtual income and made the grind even harder for players who like hunting. Another issue is the introduction of animated emotes of our character  of course behind a paywall of the appropriate amount of dollars or gold  and as players rightly emphasize, all emotes could be obtained for free in GTA Online. 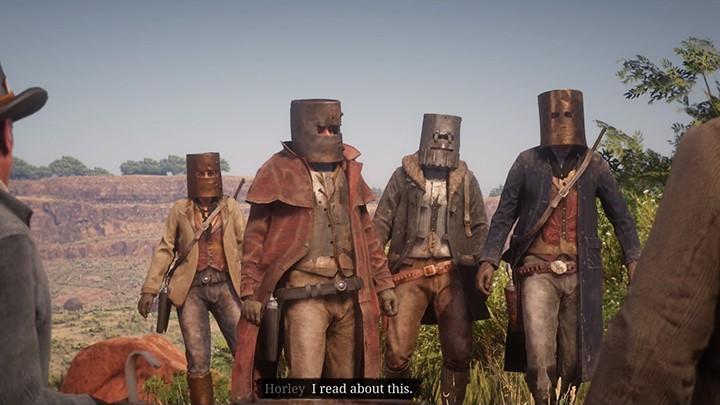 Unhappy with micro-what? Sorry, I can't hear you in this silly bucket.

The community around Red Dead Online doesn't stop at complaining. Their expectations are clear and unchanged. Everyone is waiting for cooperative bank and train robberies, the possibility of becoming a bounty hunter with demanding opponents in PvE clashes, attacks on stagecoaches, catching and selling horses, the ability of buying your own homes and ranches, hardcore and single-palyer servers or a survival mode. There are repeated requests for the game world as captivating and vivid as the one featured in the campaign. For the time being, however, Red Dead Online is accused of relying only on slow grind, encouraging microtransactions.

Even if the Rockstar can find an excuse in constant experimentation in the beta, the lack of clear communication with the players and the current direction of the development may cause concern. Regaining the trust of players will be increasingly difficuly week by week.