We had to wait a long time for information on the future of the new Total War game set in the Old World. Today, however, the devs have finally published the roadmap for Total War: Warhammer III. Details were given in a post on the official blog of the brand, which also included the following infographic, summarizing the further development of the title. 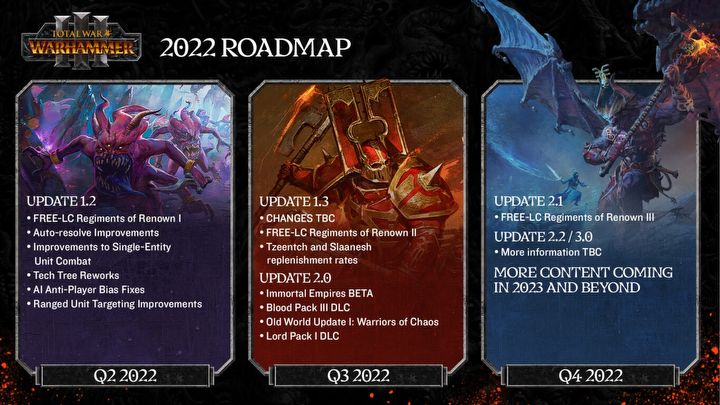 Immortal Empires? Yes, but in beta

One of the most anticipated news is Immortal Empires, which is a kind of continuation of Mortal Empires for the second game - a gigantic campaign that will combine maps and factions from all three Total War: Warhammer games. Unfortunately, while that expansion was release a month after the debut of the base game, we will have to wait much longer for its "immortal" variation in the third game.

Immortal Empires will be available only in the third quarter of 2022, and initially as an "integrated open beta". Creative Assembly explains that it will be a "monumental", constantly improving endeavor, and releasing it in beta is meant to emphasize the focus on development.

We will find out more about the expansion in the coming months.

That doesn't mean we won't get anything new until July or even September. The highlight of the second quarter will be two updates: 1.2 and 1.3.

However, apart from that we will get the first Regiments of Renown, a pack with new units. These will function a bit differently than in previous installments. The initial "regiments" will not be part of the DLC, but will be added in an update to the basis version of Total War: Warhammer III. In other words, the players will receive them for free.

In addition, the first Regiments of Renown pack will not focus on individual factions. Each faction will receive new units for free.

For the next big update we will have to wait until the third quarter. We do not know much about patch 2.0, but it has been confirmed that we will get, among other things, further improvements to the skill trees and battles. But more importantly, that's when we will also receive Total War's Assembly Kit - a set of tools to help fans create their own mods.

In addition to Immortal Empires between July and September we will receive the second and third pack of Regiments of Renown, new blood DLC (installed automatically if you own the previous versions and vice versa) and a pack with new lords, heroes etc. Creative Assembly will also be updating the races from the first two parts of Total War: Warhammer, rebalancing them and enriching with new units, mechanics, etc.

(Too) long development, players are annoyed

As for the fate of the game after September, the developer still doesn't have fully specified plans. For sure, there will be another update (minor 2.1 or major 3.0), and the developers will take on the "outdated" chat, domination mode and queues in matchmaking. Players will also receive the fourth Regiments of Renown pack.

Reaction of fans to this roadmap is far from enthusiastic. Yes, some users are happy that Richard Aldridge, who was entrusted with the post-release development of Total War: Warhammer II and apparently gained recognition for this by fans, is responsible for the DLC.

However, the discussion forums of Total War on Steam and Reddit are dominated by complaints, whether about the current condition of the game (which apparently came out "a little" too early, at least judging by the feedback from internet users) or the release of Immortal Empires so late (at least four and a half months after the base game's debut) and in beta (which was immediately interpreted as a sign that the expansion was not ready for release).

Some are also amused by the fact that seemingly simple and long-needed fixes have been singled out as important parts of the game's development. Especially since the community has long fixed these and other shortcomings of Warhammer 3 through mods.

Final Fantasy XVI is Picking up Steam on the Final Stretch