Valheim's popularity continues unabated. The devs at Iron Gate Studio report that the game has achieved another big milestone and sold over 3 million copies in total.

"This February has been truly wild! Less than three weeks into Early Access, we’ve already hit another milestone. Valheim has now been purchased by over three million brave Vikings looking to survive the 10th world of the Yggdrasil - or die trying - probably crushed by a falling tree."

This result is really impressive, considering that just 4 days ago the devs of Valheim reported that the game has sold 2 million copies. This means that this small title developed by only five people still retains a large upward trend. Probably we'll see another big achievement soon.

The popularity of the title can also be seen when looking at the stats. Although the record in the number of players was set 4 days ago and it amounts to almost 393,000 simultaneously logged in users, the current values are extremely close to the highest result. During the last 24 hours, more than 390,000 people played Valheim at the hottest moment. 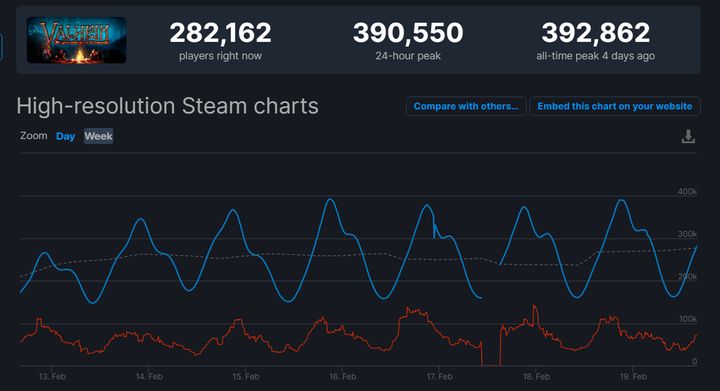 Valve Refuses to Give Apple Steam Data Against Epic Games

Valve Refuses to Give Apple Steam Data Against Epic Games