Jason Schreier, a popular journalist associated with Bloomberg, analyzed recently leaked documents regarding Warcraft III: Reforged from Blizzard Entertainment and interviewed 11 people with knowledge of the title's development. His findings show that The responsibility for last year's failuer lies mainly with Activision Blizzard, the holding company that owns Blizzard since 2007. Schreier argues that over those 14 years, Activision has played a progressively more important role in Blizzard's business and while seeking to maximize revenues (and reaching $8 billion last year) from potential hits like Diablo IV and Overwatch 2, it has also significantly reduced the budgets of smaller projects like Warcraft III: Reforged.

The announcement of Diablo Immortal at BlizzCon 2018 - at a time when fans were anticipating the fourth major installment - can be considered the first harbinger of the bad days to come. Diablo IV is finally set to be released, however, and Immortal seems to be an interesting title for lovers of mobile gaming. At the same event, the aforementioned Warcraft III: Reforged was announced, for which Blizzard had to apologize. There were many reasons to complain: poor technical condition, lack of promised features or even cutting those existing in the original from 2002... which after the release of the remaster was pulled from digital distribution. The company, which has accustomed fans to delaying releases in order to polish their titles, released a dud. However, that wasn't the plan.

In 2017 and 2018, developers from the now-disbanded Classic Games were supposed to rewrite the script and re-record all the dialogues. The developers' goal was to rewrite individual scenes and characters to fit the World of Warcraft lore. David Fried, designer of the original, who briefly participated in the work on Reforged, admitted that it would "completely reinvigorate the classic game".

But producing a remaster was more difficult than producing a refreshed version of StarCraft, and the small Classic Games team became concerned that it promised too much - or, if it didn't, that it wouldn't meet the unrealistic deadlines set by its then boss, Rob Bridenbecker. The main obstacle, however, turned out to be the limited budget. Some employees were doing multiple tasks at once, pulling nights and sacrificing weekends to meet the challenge. But this was not enough. The mass layoff of 800 people in February 2019, which left Blizzard's support departments deserted, didn't help either.

And so Warcraft III: Reforged began to lose features. Executives threw revised scripts and new footage in the trash, making the decision to stick with the original versions of cut-scenes. The aforementioned David Fried was to say outright that he is "deeply disappointed by Activision's proactive action against the interests of all gamers". The developer also pointed to Mike Morhaime's symbolic departure from Blizzard - one of the co-founders and former CEO of the company, who was particularly committed to releasing quality games and treating audiences fairly. Morhaime left Blizzard before the aforementioned BlizzCon 2018. 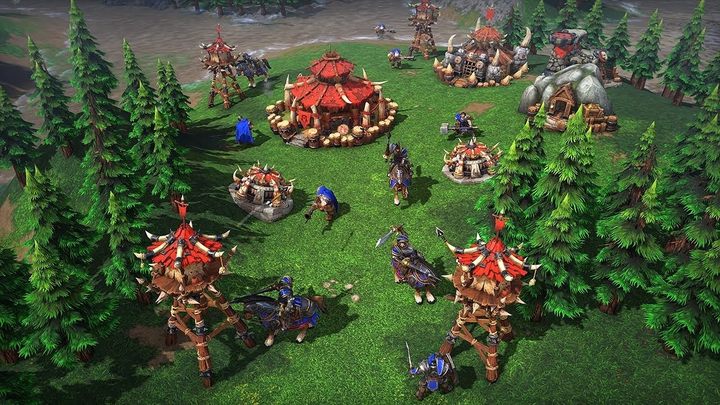 Reforged has not been turned into a success.

Instead of aiding the overworked team at Classic Games or giving them more time to complete the project, Activision pushed for the fastest possible release. The reason? The start of pre-orders for Warcraft III: Reforged. The company could not (did not want to?) take the risk associated with having to refund players who might not want to invest in the same title a second time. Eventually, some support for the people from Classic Games was found, but, unfortunately, it turned out to be insufficient, and the wait for the release of Reforged - unlike the celebrated countdown at the release of previous Blizzard games - turned into a nightmare.

Activision Blizzard enabled players to automatically get a refund for the game and declared restoration of promised features, but so far - eighteen months after the release of Warcraft III: Reforged - we still haven't seen them... and we probably won't. There is a chance, however, that what the industry giants failed to do, can be accomplished by the fans who are working on the Warcraft 3 Champions project.

Will Activision Blizzard learn anything from this whole situation? Let's hope so. The next remaster, Diablo II: Resurrected, seems to be made with feasible plans and promises to be quite good. Malicious people might wish the company another flop, because just as one swallow does not make a spring, one failed game is not enough to destroy the reputation of such a giant as Activision Blizzard. But two? Who knows? Especially when combined with today's news regarding accusations of sexual violence and mobbiing they could make all the difference.

Battlefield Portal May be the Revolution That the Brand Needs